‘Eroticism, Excess and Eurozone Angst’ stated the programme tagline for this special screening of Sergio Martino’s Your Vice Is a Locked Room and Only I Have the Key (1972): three things that would not be out-of-place in the current Italian political landscape. What awaited with Your Vice, on the other hand, was a handful of strong central performances, some real shocks and turns, and most of the staples of stylish-yet-sleazy Italian giallo.

This director-approved screening forms part of Cine-Excess VI – the International Cult Film Conference. Your Vice was Sergio Martino’s fourth giallo film, made in 1972 in the same year as All The Colours of The Dark (also shown at Cine-Excess). In cinema, the term ‘giallo’ has come to denote a style of cinema – seen here in all its glory – which was incredibly popular in the 1970s and combines a perverse European sensibility and style, with elements of the literary mystery and the sexual and psychological thriller. Your Vice has all the ingredients of early giallo horror, from the psychological intrigue to the literary mystery. What we get is healthy lashings of Euro-sleaze, blood, gore and tits, all set to a lusciously over-dramatic soundtrack. 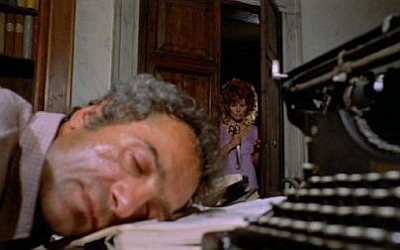 Oliviero Rouvigny (a lugubrious Luigi Pistilli) is a frustrated writer and an alcoholic who spends his time either drinking or shagging, with occasional interludes to humiliate his wife Irina (played wonderfully by Euro-hottie and giallo darling Anita Strindberg). They live in a crumbling villa, all ruined white staircases and creaking doors, where a bored Oliviero organises debauched hippy gatherings with wasted young things.

Irina finds solace from her husband’s abuse by indulging in some soft-focus lesbianism, and playing with her pet birds – that is, until Satan the cat (Oliviero’s moggy named after his deceased mother), eats them for his supper. When faced with such a threat, there is only one natural response. YouTube kitty lovers, look away: she gouges out Satan’s eyes.

Oliviero cheats on his wife with Brenda the maid (Angela La Vorgna), and most of the house guests, until one of his lovers is found sliced up. He becomes a main suspect to a variety of local murders, and then we find out that Irina knew he came home late the very night the girl was murdered. Expect a Lolita-esque niece in Floriana (Martino favourite, the gorgeous Edwige Fenech), terrible 70s outfits, bucket-loads of gore and a plate of eyeballs. Your Vice Is a Locked Room and Only I Have the Key is a lusciously Gothic, baroque opera of blood, lust and cruelty from one of the great under-rated giallo directors.