What the hell happened to sunny Australia? Starting with Greg Mclean’s chillingly bleak Wolf Creek (2005), continuing with David Michôd’s Animal Kingdom (2010) and seen most recently in Justin Kurzel’s Snowtown (2011), Australian cinema now seems fixated with grim portrayals of life down under. Kurzel’s debut, now available to own on DVD and Blu-ray, is a slowly creeping, revelatory true crime story that arguably tops both aforementioned films.

We begin with the Vlassakis family, consisting of three young men and a single mother, living in a rundown area of a small backwater town. The arrival of John (Daniel Henshall), mum’s new boyfriend and protector, seems at first like a turn for the better. Riding in on a motorbike as if it were a white horse, he’s a gregarious, cheerful and chubby chap, chasing off the local paedophile with admirable verve. He also takes middle son Jamie (Lucas Pittaway), under his wing, giving him a ride on his motorcycle and getting him to cut his floppy hair. Jamie is a vulnerable lead, brutalised and damaged, and John appears to have made it his mission to mentor the boy. 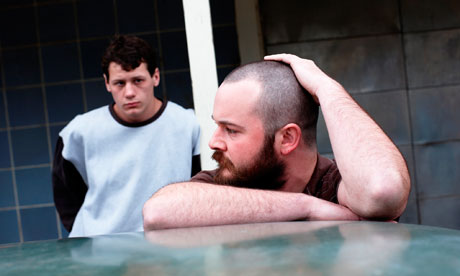 John is one of those guys with a philosophy of life, a chirpy answer to everything, complete with a tool box and a wall with photographs of those he perceives to be his enemies. As Jamie gets closer to him, somehow he finds himself already in the middle of something genuinely nasty and with no way out. And meanwhile, as John’s true tendencies become apparent and his techniques honed, the world outside passes by on bikes, carefree and ignorant of the violence that takes place in the town’s bathrooms and kitchens.

Though talking about ‘the banality of evil’ is now in danger of itself becoming banal – see the recent release of Michael (2011), the collected work of Michael Haneke and even the Fincher’s slick remake of The Girl with the Dragon Tattoo (2011) – Snowtown is both utterly convincing and harrowing as a portrayal of wickedness at its most normal, seductive and terrifying. The Hannah Ardent quote is open to debate – she attended only part of Adolph Eichman’s trial and so got the bureaucracy and missed some of the less banal aspects of evil – and that is what Kurzel’s film gets; not just the banality of the evil, but the otherness of it too.

Snowtown is an admirable addition to a late renaissance of a fine tradition in Australian filmmaking, which stretches from Peter Weir’s earlier work to the Ozploitation genre, including such films as Razorback (1984) and George Miller’s soon-to-be-remade Mad Max (1979). Kurzel’s debut will haunt and disturb you long after its over – given the subject matter, that’s exactly how it should be.