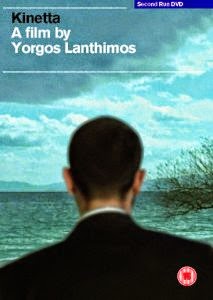 The search for meaning can be a futile task in a world obsessed with imagined realities; especially when the line between fact and fiction is distorted and ill-defined. The innate quest for purpose is the core of Yorgos Lanthimos’ surreal debut Kinetta (2005), where detachment from modern life is essential in order to unravel the enigmas of human behaviour. Set in a faded holiday resort populated by migrant workers, it contravenes the rules of the medium, approaching its mysteries from an innovative, often infuriatingly obscure perspective. The audience are forced to re-evaluate the world that exists outside the frame and immerse themselves in this comically absurd form of social commentary.

Music blares from the stereo of an upturned car as a man stares into the wreckage. He reaches in through the smashed windscreen, ejects the cassette and places it into his Walkman; leaving without checking the body that hangs lifeless from the driver’s seat. In a nearby hotel room a chambermaid is caught in a violent tussle with an invisible attacker, gasping for breath whilst flailing on the floor. Gradually the enigmatic tableaux of Lanthimos’ puzzling narrative begins to become clear and we learn that the woman is rehearsing for a scene, whilst the man is a photo laboratory assistant who works part time as a camera man. The pair are assisting a police officer as he attempts to solve a spate of recent murders by re-creating them as short movies.

Going into exhaustive detail, the cop directs the maid as he attempts to find the truth in these re-enactments. The maid, committed to her art, becomes emotionally drained by the roles she’s forced to perform, whilst the photo clerk grows infatuated with the woman he observes through the viewfinder. However in a holiday town devoid of cheer it can be hard to capture the lustre of your fantasies, especially when the world around you is shrouded in despair. A comprehensive dissection of Lanthimos’ ashen-hued debut is a difficult, and frankly thankless task. From its cheerless setting, to the somnolent pace of the narrative Kinetta inhabits an unusual state of narrative purgatory. Lanthimos switches erratically from the focused deployment of one-point perspective to flailing hand-held camera work, imparting a weightless quality that only amplifies the confusion evoked by his peculiar behaviourist study of society. Life’s uglier elements can be painful to explore in the harsh light of day, yet by allowing his characters to explore their innermost desires through art Lanthimos has created an alluring and darkly sophisticated study of contemporary malaise in a society forced to move from an age of promise to one pleasant, yet empty .

The only splash of vitality in Lanthimos’ holiday resort is the sight of a pink frozen jelly, yet even then its quivering movement is subdued by the crinkled cellophane it’s veiled in. This disconnect between place and purpose, emotion and reaction culminates in a rough, awkward debut, but one brimming with energy, especially for those familiar with his more recent repertoire. However, unlike the morbid comedy of Alps (2013) and the uncomfortable intrigued evoked in Dogtooth (2009) the humour here is less prevalent whilst the enigmatic narrative slowly unfurls into a benign whimper of resignation rather than the disturbing revelation one might expect. The reticent interactions of Lanthimos’ trio of despairing souls mirrors the faded hopes of a transitory generation of dreamers, yet sadly Kinetta is too lost amongst the small, ostensibly insignificant gestures of its characters to truly grasp the larger movements occurring within the periphery.