Jerzy Kawalerowicz’s Mother Joan of the Angels (1961) is perhaps a film you watch because you feel you should. Like reading Dickens, if your passion is for books, or visiting the Tate Modern if it’s art, Kawalerowicz’s cult work is pre-requisite, though not necessarily easy viewing for fans of cinema. This depiction of demonic possession in a 17th century Polish convent, starring Lucyna Winnicka in the titular role with support from Mieczyslaw Voit and Anna Ciepielewska, remains a visually stunning exercise of startling cinematic imagery.

The film follows Father Suryn (Voit), sent in to investigate a case of demonic possession amongst the nuns of a rural convent, following the burning of the local priest who was found to be sexually tempting the holy sisters. At the convent Suryn meets its abbess, Mother Joan (Winnicka), said to be the most possessed of all the convent’s inhabitants. As the days pass the true ‘spirit’ of the convent is soon revealed as Suryn attempts to save Joan and her demonic flock. 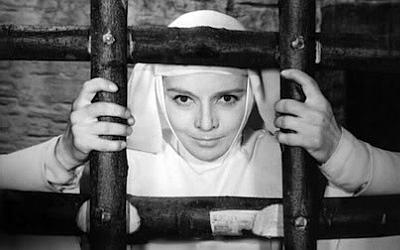 Reputedly based on the same true story as Ken Russell’s controversial masterpiece The Devils (1971), Mother Joan of the Angels approaches from a different but no-less hard-hitting angle. Though calling itself a horror/drama, the film’s unsettling aspects are derived more through disturbing inference than in-your-face viscerals. Its depiction of Suryn’s mental breakdown during his efforts to save the soul of the possessed Joan whilst simultaneously dealing with his own personal self-abasement due to his devout religious fanaticism, is truly disturbing and undoubtedly leaves the film’s strongest image.

The other most memorable aspect of Kawalerowicz’ cult classic, which is likely to appeal more to students of serious cinematic technique and narrative than mainstream film audiences, is its visually arresting look. Shot in stark monochrome, the sparseness of the rural setting and the bleakness of the convent, with a bare minimum of props and costumes, are not only the prefect backdrops for the unfolding tale of religious mortification and sexual temptation, but also evocative realisations of the harshness of life in the middle-ages.

Mother Joan of the Angels is a film whose viewing is rewarding, though may require the patience of a saint to see it through to the end.