★★★☆☆
Japanese cult director Gakuryu Ishii’s Isn’t Anyone Alive? (2012) has already been picked up for distribution from renowned purveyors of high quality Asian cinema, Third Window Distribution, although this sadly means that the film is unlikely to get a UK theatrical release. A high-concept, apocalyptic comedy, Ishii’s latest is yet another example of his unorthodox style and aptitude for installing a punk rock ethos into otherwise formulaic genres.

Adapted from a play by Shiro Maeda about the ignored banality that often accompanies death, Isn’t Anyone Alive? follows the stories of several students whose college has become the epicenter of a virus outbreak which looks set to wipe out the human race. Each student succumbs to this deadly, invisible disease differently, however whilst their varying deaths provoke some mild curiosity, it is in fact the distinctive ways they each deal with their impending finale that becomes the most fascinating aspect of this dialogue-heavy fable. 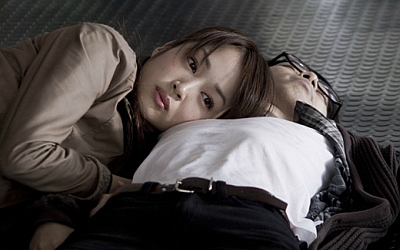 Ishii’s film is a sharp satire on the increasingly egotistical lifestyle of today’s youth. These image-conscious teenagers are full of the joys of adolescence; yet remain consumed with their own outward appearance and how others perceive them. Rather than grieve for the loss of their friends and family, each character is engulfed in their own self imposed ennui for life, far more concerned with their ridiculously mundane rituals, culminating in a farcical antidote to their overblown sentiment of Hollywood disaster movies.

There is very little behind the superficial façade of Ishii’s detestable cast, a fact he emphasises by presenting them through a cold, sterile palate that dilutes any sense of peril that could have possibly been harvested from this incredibly sarcastic melodrama. Further enhancing their detached and nonchalant veneer by cleverly using split-screen shots to further emphasis how disconnected with reality each character has become, its only the riotous, alternative soundtrack which breaths any life into the film, punctuating Ishii’s wonderfully detached tale with just enough energy and urgency to stop it from flat-lining.

Isn’t Anyone Alive?’s tedious script often stumbles under the weight of its bloated cast of weary, disenfranchised souls. Combine this with its absence of any perceptible peril or action many audience will no doubt struggle to enjoy the film’s incredibly Eastern humour – no more so than some of the film’s ‘drama school’ death scenes. However, behind its icy surface lays an enjoyable slice of contemporary Japanese satire.