David Zellner’s Kid-Thing (2012) is a feverish tale of a destructive young girl who operates freely beyond all moral boundaries. An offbeat comedy, which quickly shifts gear into something considerably darker, Kid-Thing starts with a ferocious pace before developing into an uncomfortable adolescent morality tale.

Annie (Sydney Aguirre) lives in a small Texan town with her incompetent father who’s just as hopeless at managing his dilapidated farm as he is at raising Annie. Often left to her own devices and with no paternal supervision to guide her, she spends her time causing havoc within the surrounding area – from shoplifting and truancy to wanton acts of vandalism, there’s no limit to the destructive force of this wayward 10-year-old. However, her underlying malevolence only truly emerges after she hears a plaintive call for help from a disused well and refuses to do as this distraught woman tells her. 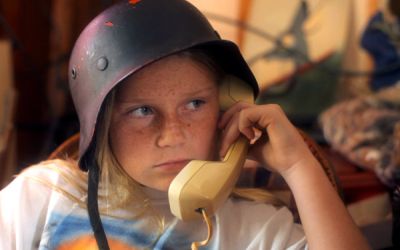 From Kid-Thing’s opening scene, where we observer the film’s young, rambunctious protagonist sat alone watching her father partake in a destruction derby, it’s clear Annie’s vicious temperament and contempt for others has been absorbed through cultural osmosis. With no moral compass to guide her, this rebellious nature has consumed Annie’s life at perhaps her most influential and impressionable period. It’s this message of how an environment of chaos can do little more than breed more chaos which drives the film’s narrative forward with a wild and vigorous urgency.

An American reaction to the recent influx of European adolescent dramas, Kid-Thing adds a fresh and invigorating perspective on this burgeoning sub-genre. However, whilst observing Annie reap mayhem at every possible junction certainly makes for some thoroughly entertain viewing, the morality tale which frames her actions feels somewhat heavy handed and implausible. Combine this with the thinly drawn characterisation of her neglectful father and you have a film that you’ll desperately want to fall in love with, yet not unlike its unruly protagonist, seems entirely unwilling to reciprocate your affections.

A strong central performance from Aguirre and some deft excursions into the escapades of an insubordinate adolescent means that Zellner’s deadpan drama is certainly deserving of your attention. It’s just a shame that Kid-Thing fails to build upon these tantalising components.