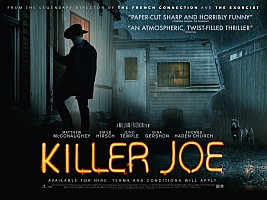 This year’s opening film at the Edinburgh International Film Festival is William Friedkin’s trashy, yet extremely provocative Killer Joe (2011). Starring Matthew McConaughey, Emile Hirsch and Juno Temple, Friedkin’s latest feature is a surreal, absurd and incredibly nauseating Texan film noir which will not only reshape your perception of McConaughey as a leading man but makes sure you’ll never look at a piece of fried chicken the same way ever again.

In a sleepy Texan town Chris Smith (Emile Hirsch), a reckless drifter and hopeless twenty-something, finds himself in debt to a local gangster. If he fails to pay up within the next few weeks his life will be forfeit, however, he’s recently discovered that his estranged mother has a life insurance policy which will more than cover the amount he owes. He turns to ‘Killer’ Joe Cooper, a Dallas detective who moonlights as an assassin, the only problem is that he doesn’t have enough cash for a down payment. Enter Dottie (Juno Temple), Chris’ peculiar sister who Joe takes an instant liking to, agreeing to keep her as a retainer for his services. However, when things turn sour Joe’s newly intimate relationship with this dysfunctional family culminates in a spiralling series of shocking events. 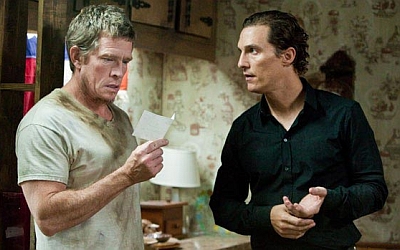 Killer Joe is an unrelenting experience built around classic noir conventions that culminates in the viewer being caught in a constant state of both genuine shock and uncontrollable exuberance. As equally gruesome and disturbing as it is hilarious, Friedkin has created a film which epitomises the midnight movie genre, providing a delectable cocktail of lowbrow laughter and cringe inducing anxiety. With dialogue so sharp it could be classed as a dangerous weapon, Killer Joe’s intelligent handling of such an outlandish and grotesque series of events prevents the film from depending on simple shock tactics to gain notoriety (although one scene’s controversial use of deep fried chicken will undoubtedly resonate with many for a long time) but rather relies on its endearingly charismatic methodology to win over the audience.

Matthew McConaughey steals the show with his performance as the film’s titular anti-hero. Clearly deranged yet incredibly likeable, he exudes a fierce charm that culminates in the audience both fearing him yet feeling strangely subdued whenever he’s not on screen. A career changing role that combines his cocky, self-assured demeanour from Dazed and Confused (1993) with a sociopathic intensity akin to Woody Harrelson’s star-making role in Oliver Stone’s Natural Born Killers (1994). It’s a role that could so easily have descended into pantomime villainy with McConaughey’s restrained yet screen stealing approach the key ingredient to the film’s overall success, turning his sinister hit-man into a relatively angelic presence who’s candour shines against the backdrop of an exceedingly detestable family dynamic.

It’s hard to imagine a better opening film for this year’s Edinburgh Film Festival than Killer Joe, which contains all the ingredients required of a high-brow festival film with subversive humour and repugnant violence framing a dark morality tale that whilst perfectly at home amongst the hordes of cinephiles in attendance, may perhaps be too much for a conventional audience.