Mani Haghighi’s Modest Reception (Paziraie Sadeh, 2012) is a darkly comic piece of satirical comedy framed by a dark morality tale that perfectly depicts the collapse of a rural Iranian community. A mysterious man and woman drive their car through the picturesque, snow-capped, mountainous areas of Iran. Sometimes they refer to each other as brother and sister, other times as a married couple, either way it’s clear to see that there’s a complicated history shared between them.

In the boot of their car are numerous, numbered, plastic bags, each containing a sizeable amount of cash, intended to be handed out to the area’s impoverished inhabitants. However, this enigmatic pair certainly isn’t the Robin Hood figure you’re expecting, using these charitable donations to test the moral values of their un-expectant beneficiaries. What initially begins as a light-hearted social experiment – like refusing to give the money to a man who would continue to work a belittling job despite his new found fortune – quickly spirals out of control, and as their journey delves deeper into this isolated rural region their tests become more extreme and unethical, pushing the moral boundaries of these underprivileged recipients to an outrageous level. 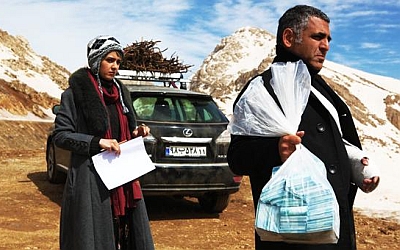 Whilst the dark comedy that litters the film’s opening act is thoroughly entertaining. it’s the intrigue that accompanies director Haghighi’s increasingly uncomfortable film that is ultimately its most prized asset, leaving the audience as bewildered as the locals who seem strangely reluctant to accept such grandiose gifts. Slowly revealing itself to actually be more of an examination about the weakness and strengths of the human condition, the film slowly swells to a far dark final act than its jovial opening would suggest.

Modest Reception’s anarchic and riotous opening is punctuated with intelligent dialogue delivered sublimely from the film’s constantly feuding protagonists – played brilliantly by Taraneh Alidoosti and director Haghighi. However, this enthralling introduction is also the film’s downfall, offering the audience a delightfully funny and absorbing tale before quickly revealing its heading towards a dead end. Unfortunately culminating in a disappointing conclusion, which fails to effectively emphasize the film’s moral message, Haghighi regrettably turns his protagonists’ self-reflective meditation towards their actions into little more than an unsatisfactory and lacklustre philosophical slap on the wrist.

Undeniably more enjoyable as a comedy than the thought-provoking piece of satire it’s intended to be, Haghighi’s Modest Reception sadly disappoints after its explosive opening. As a pot-boiler of social commentary, Haghighi sadly lets his enticing ingredients over cook, culminating in a tasteless and uninspiring finale. Never lacking in spirit of adventure this inventive Iranian portrait of the decomposing moral compass of a nation in a precarious position fails to live up to its lofty ambition – a shame because almost ever other facet of this inventive film is thoroughly gratifying.