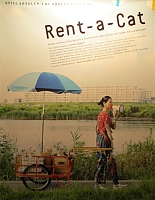 Naoko Ogigami’s Rent-a-Cat (Rentaneko, 2011) is a delightfully twee story of self discovery which successfully blends elements of Jean-Pierre Jeunet’s Amélie (2001) with the sweet sentiment of Studio Ghibli. One of the most simplistic and accessible offerings at this year’s Edinburgh International Film Festival, Rent-a-Cat is a delightfully refreshing palate cleanser compared to the more viscerally surreal, socio-politically gritty and mentally demanding offerings at this year’s festival.

Sayoko is a young girl who attracts cats. Maybe it’s down to a smell she exudes, or perhaps they sense her loneliness, either way she’s so far sadly failed to have the same effect on people. During the day (when not posting life aims on her bedroom wall or pursuing one of her many other careers – each one apparently: “All she’s been good at since she was young”) she strolls along the bank of her local river with her small hand cart renting out cats to similarly lonely people. She rents out these compassionate felines to an eclectic mix of elderly widows, insular businessmen and melancholic singles. However, whilst successful in bringing joy to these depressed individuals, she’s so far been unable to fill the hole which resides within her own heart. 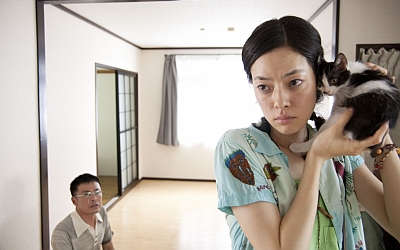 A delightful slice of Japanese pop culture, Rent-a-Cat is just as twee and whimsical as you’d expect, however, what’s commendable about this lighthearted examination of social solitude is just how restrained it manages to be. Despite numerous opportunities for it’s sporadic flights of the imagination to boil over into a cringeworthy collection of quirky set pieces, it continues to stay relatively grounded. This controlled approach of director Ogigami, combined with the patience shown in capturing the playful antics of her four legged cast members is what elevates Rent-a-Cat from being merely a stylised and gimmicky comedy and transforming it into a genuinely touching movie.

Whilst Rent-a-Cat may lack the depth or seriousness normally associated with a festival film it manages to hold its own amongst it’s more well respected peers. Never coming across as mawkish or overly contrived, the emotion which naturally flows from the screen is gently amalgamated with some pitch perfect comedic asides and whilst its simplistic tale can become mildly repetitive towards the end of its second act, its contagiously optimistic outlook on life remains incredibly enjoyable throughout.

Rent-a-Cat is a film made for cat lovers that will no doubt win over the hearts of anyone who’s ever felt a yearning for unconditional companionship.