One particular sound which audiences might not appreciate being quite so distinct and loud is that of Captain Quint (Robert Shaw) scraping his fingernails down the chalkboard in order to silence a chaotic town meeting, just one of numerous iconic Jaws  moments. In fact, every single scene feels more like a classic than ever before. Moments of exposition are rendered as exciting as scenes of shark-based action (see Matt Hooper’s (Richard Dreyfuss) “This was no boat accident” routine). 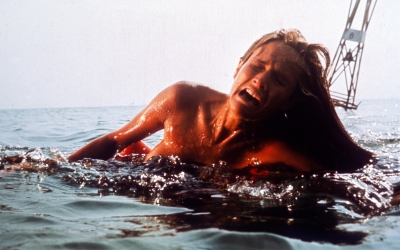 What’s more, Spielberg’s superb attention to detail unobtrusively sets up what we will later see in the film – Chief Brody (Rob Schneider) flicks through his shark book (pages reflected in his glasses), seeing a number of pictures which set up the end of the film. The occasional cinematic trick shot – the smash zoom borrowed from Hitchock’s Vertigo (1958) during the second Great White attack – serves the narrative rather than simply being showy for the sake of it.

Importantly, Spielberg instinctively knows exactly when to keep his camera still and allow what’s in front of it to take precedence. The scene where Mrs. Kitner (Lee Fierro), the young victim’s mother, confronts the chief on the dock is an example of a still but masterful composition. An uncomfortable witness is even caught and magnified in the lens of Brody’s glasses as we look over his shoulder at the terrible scene enfolding.

Like Hitchcock’s horror masterpiece Psycho (1960), Jaws is a film of two halves – with the second half full of intense, character-driven action set against a seascape of uncommon beauty. The titular shark – unseen at first and then perhaps seen a little too much (the models remain slightly clunky) – represents the one big fear that liberates us from all those little fears. If you’re in the water with a shark, you tend to stop worrying about your career, your family and your fear of the water.

In a year that has seen several unnecessary 3D reissues, Spielberg’s masterful Jaws is a film that deserves to be restored for the big screen. If your heart doesn’t beat frantically as you sit in the darkness hearing Williams’ initial, impending bass chords, then you frankly have no business being in a cinema.