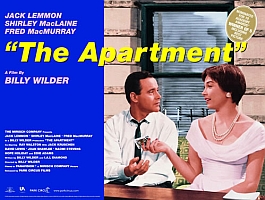 Billy Wilder was the rarest of creatures – a mainstream American director openly praised by his European compatriots, gaining auteur status thanks to the support of the Cahiers du Cinema and a number of the French Nouvelle Vague’s most prominent figureheads. Wilder’s universal and timeless appeal is celebrated this week with a new digital restoration of his 1960 Oscar-winning classic The Apartment, given a special limited theatrical run courtesy of Park Circus.

Following hot on the heels (almost literally) of his immense comic turn in Wilder’s Some Like it Hot (1959), Hollywood star Jack Lemmon returns once again in the central role as C.C. Baxter, a lowly New York office clerk who carries favour with the executives in his office by handing out the key to his small apartment for courting purposes. 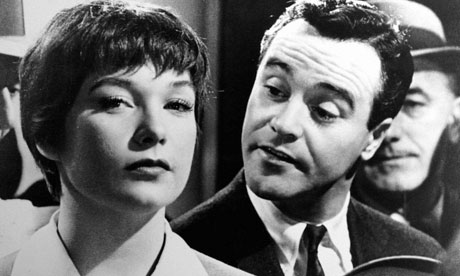 Amongst Baxter’s growing clientele is, unfortunately, his womanising (married) boss, J.D. Sheldrake (Double Indemnity’s (1944) Fred MacMurray), who is currently embroiled in a rather complicated affair with the building’s sweet-natured lift operator Fran Kubelik (Shirley MacLaine). After Sheldrake coldly dumps the fragile young woman, Baxter finds himself comforting Fran and thenceforth endeavours to keep her from taking her own life in despair.

For the era it was made within, The Apartment is an incredibly cynical expose of male promiscuity, clearly depicting the damage that can be caused by extra-marital activities. MacLaine’s angelic, happy-go-lucky Fran is pushed to the brink of suicide (and beyond) by her abhorrent mistreatment at the hands of the high-powered, snakelike Sheldrake, a superbly manipulative beast, comparable with the likes of All About Eve’s (1950) serpentine Addison DeWitt (George Sanders). It’s the heroic Baxter’s endearing clumsiness and enduring abstinence that ultimately singles him out as the hero of the piece, ultimately salvaging not simply one life, but two.

Despite such bleak material, Wilder is a master of drawing comedy out of the darkest of scenarios. Gallows humour is in abundance throughout The Apartment, and even the hardest viewer would be hard-pressed not to smirk at the sight Lemmon draining spaghetti through a tennis racket – a perfect symbol of his bachelor man-child lifestyle. Wilder’s supreme skill at balancing light with dark is almost unsurpassed, and is the perfect fit for the chameleon-like talents of both Lemmon and MacLaine.