Hell (2011), the new sci-fi / horror from producer German-born Roland Emmerich and director Tim Fehlbaum, is undeniably aptly-titled. For the viewer, to watch this film starring Hannah Herzsprung, Stipe Erceg, Lisa Vicari and Lars Eidinger is a feat of endurance verging on purgatorial proportions.

The sun, once mankind’s source of life, has become a means of death, searing the earth and burning anything living which stays exposed to it for more than a few minutes. Across this barren landscape travel Marie (Herzsprung), her young sister Leonie (Vicari) and Marie’s ‘boyfriend’ Phillip (Eidinger) who, along with a stranger called Tom (Erceg) whom they pick up on the way, are heading for the mountains where they hope to find shelter and, more importantly, water. Unfortunately nearing the foothills they are ambushed, and it is only then that they realise their troubles are just starting. 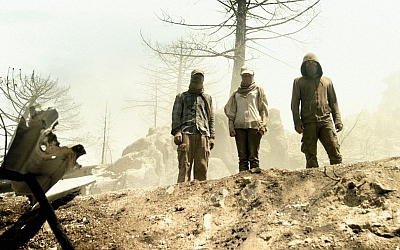 It seems pre-requisite for films set in a futuristic world gone awry, from George Miller’s Mad Max (1979) to Jim Mickle’s Stake Land (2010), that they are peopled with characters who are mistrusting, suspicious loners living in dusty barren landscapes dotted with charred car wrecks and abandoned towns.

Hell is no exception, with the components of this apocalyptic road movie being pretty sparse. On the whole this approach – from the scorched and acrid setting against which the action plays out to the basic jeans and hoodie combos the characters protect themselves with from the searing sun – works. The paring back of these elements helps to heighten what little tension there is throughout the film.

However the one place where this minimalism is carried through to yet plays to the film’s detriment is with the dialogue and, subsequently any resulting characterisation. Speech here is scant, consisting mainly of monosyllabic orders barked by the various protagonists at anyone to whom they feel superior. Though common in cinematic visualisations of futuristic post-disaster environments, this is a trait which does the resulting film no favours. The viewer wants to empathise with the individuals, otherwise why should you worry what becomes of them? Here you are left with an overwhelming sense of who the Hell cares?

Unlike the terrorised characters from Hell the viewer can put an end to their torture by simply hitting the off button – an option which will likely not be available should the film’s depiction of the future become a reality.