Despite its unremitting action sequences and oversexed narrative, Showtime’s Homeland emerged as one of America’s high-flying seasonal exports. As the pale lips of Damian Lewis gingerly pouted at the prospect of being exposed as an Eton thesp incognito, nations relished Claire Danes’ pursuit to develop another facial expression other than ‘aloof’. The think pieces whittle down to foreseen cliffhangers and formulaic thrills ‘n’ spills. Yet amongst all the globalist drama lay the original concept of its Israeli inspiration, Prisoners of War.

Prisoners of War (aka Hatufim) follows in the same vein as its Western protégé. Israeli abductees, captured whilst on a reconnaissance mission to Lebanon, are set to return to their families at home. Yet evident similarities to Homeland slowly become few and far between as writer/director Gideon Raff’s 2009 military opus transcends into extensive (and, at times, laborious) dialogue and meticulous character building. 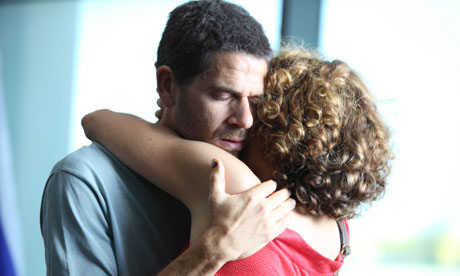 The emotional onslaught picks up some 17 years after the soldiers were captured, and, as one could perceive, not all is the same. Every minuscule alteration in their new life mutates itself into an unbreakable wall of inward detachment. One character, Nimrod Klein (Yoram Toledano) is faced not only with a troublesome teen, but a troublesome teen that cannot recall ever having a father. Another, Uri Zach (Ishai Golan) not only has to rekindle the spark between him and his wife, but rekindle it as she attempts to conceal her new life with Uri’s own brother.

Comparatively, colourings of Homeland are peppered in early episodes; the awkward sexual encounters; the occasional hazy flashback; the shocking scars on their bodies (hence the flashbacks). But the inclusion of several central abductees makes the process of elimination almost impossible. It becomes psychologically baffling, like Lost on the battlefield. Rather than turn your knuckles a lighter shade of white, Prisoners of War talks you into a frenzy. When you take out the snipers, the bombs and all the excess American bombast, you’re left with a truly communicative fight for truth.

If you seek passivity, you’d be well-advised to avoid Raff’s Prisoners of War – an existential onslaught within ten mentally-gruelling episodes. It’s also – comparable to Homeland‘s impact in the states – one of Israel’s most important television series to be released for many a year. Ironic really, when you learn that the creators of 24 snapped the show up before anything was even shot – now that’s real food for thought.