For a black-and-white German film from the silent era, Fritz Lang’s groundbreaking 1927 sci-fi Metropolis has had a colourful and noisy history in its 85 years of being. Lang’s classic found a new lease of life in 1984 when Giorgio Moroder – the man behind Donna Summer’s Love to Love You Baby – led a full-scale restoration of the film, adding his own score along with songs from some of the artists he’d worked with: Adam Ant, Freddie Mercury and even Pat Benatar.

In the early 1980s, this bold experiment must have been viewed as the most cutting of all edges. Fast forward to today and it becomes something of a double artefact, time capsules from two eras to marvel at. Both visions offer interest to those of us who live in the future (we’re only thirteen years away from 2026, when Metropolis was set), yet somehow it’s Moroder’s contribution which has dated worse. Moroder was not new to film music, but where his soundtrack for Brian De Palma’s Scarface (1983) aligns perfectly with the film’s gaudy 80s kitsch, here it is a clash of styles and ideals, and one that never fully reconciles itself. 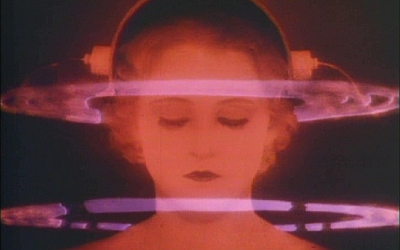 There are some harmonies to be found between the flamboyant nature of 80s pop and Lang’s sometime histrionic, operatic set pieces, and the more you watch, the easier you settle into the confusing hybrid. Then the inflated Welsh lungs of Bonnie Tyler blare through the speakers again, and it becomes hard to take anything on screen too seriously. Which is a shame, as Metropolis remains stunning and powerful – science fiction technofear meets biblical mythology meets overwrought melodrama meets German expressionism.

Moroder tinkers elsewhere, with mixed results. Swapping clunky old inter-titles for subtitles is a deft move and allows things to flow a lot smoother, at least for a modern pair of eyes. Colourising the original sepia film is perhaps a tamper too far – it may only be a purist’s concern, but it feels an unnecessary imposition on, and deviation from, Lang’s original vision.

This is definitively not the definitive version, and if you’re new to Metropolis, it’s highly recommended that you start with a more conventional soundtrack. But those revisiting may want to explore such a unique curio, if only for the unintended amusement to be had from seeing a thousand film extras from a hundred years ago complemented by a Loverboy power ballad.