A nondescript North African mountain village, serves us the setting for French director Radu Mihaileanu’s re-imagining of Aristophanes’ Lysistrata as a comedy drama about a group of Muslim women rebelling against their patriarchal social system in The Source (La source des femmes, 2011). Aristophanes’ comedy saw the women of ancient Greece uniting to end the Peloponnesian War by refusing to take their men into their beds until peace was agreed and this is the same strategy employed by the woman of this village.

They, and their mothers before them, have always traversed the rocky terrain of the mountain to climb up to the nearest water source and back again leaden with brimming pails. When a pregnant woman tumbles and loses her baby during one such descent, the spirited young Leila (Leïla Bekhti) decides that change is required. Supported by her educated husband, Sami (Saleh Bakri), Leila convinces the other women to initiate a ‘love strike’ until the men have arranged for there to be running water in the village itself negating the need for the regular ascent. Naturally, this does not go down well with the men. 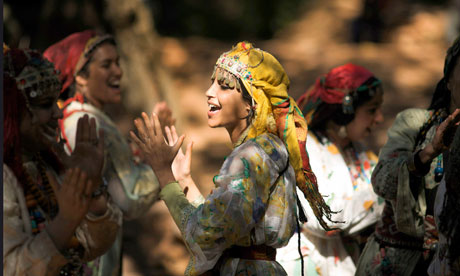 Whilst enjoyable, The Source never quite delivers on its setup. It works well early on as relatively light comedy as Leila struggles to convince the other women to join her campaign and they, in turn, have their resolve tested by their own desires and their husbands’ assertions. The material then darkens as this persistence extends to physical abuse and consequently a scheme is drawn up to trade those that Leila has ‘bewitched’ for more obedient wives.

Regrettably, Mihaileanu’s film ultimately shies away from these themes, seeming to want for a little more conviction; the majority of offences appear to be forgotten or ignored. A lack of direction means that by the time the films reaches its climax, it is possible not to recall the perilous climb to the water source as we’re busy trying to keep up with Leila’s first love arriving in the village; the condemnation of her mother-in-law; a plot to replace the Imam, and the pen-pal romance of one of the younger women.

None of the film’s subplots are developed or integral enough to be entirely necessary and with so many players it is difficult for writer Alain-Michel Blanc to provide fulfilling character arcs. Still, with strong performances from the lead cast and several very nicely captured moments, The Source is pleasant, lightweight effort, if not as funny or as satirical as it might have been.