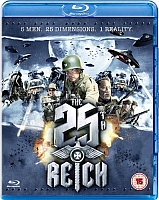 You wait years for a schlocky, tongue-in-cheek, sci-fiction B-movie about Nazis and then two come along at once. Landing on DVD only weeks after Timo Vuorensola’s Finnish pastiche Iron Sky (2012), comes Stephen Amis’ The 25th Reich (2012). Unlike Iron Sky however, this film doesn’t boast a killer one (tag)line premise, but it’s not bad and fits the bill for a spoof of this ilk; five US soldiers travel back from 1943 to the prehistoric past to salvage a UFO which might aid the allies in defeating Hitler. The plot gets wackier when we find out that the group are in fact tricked into the past whilst on a routine puma-catching mission in the Australian outback. 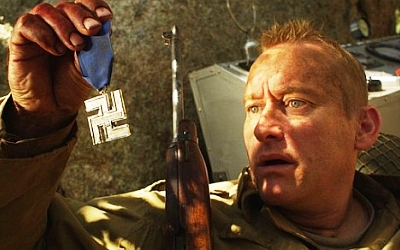 The 25th Reich is supposedly harking back to the work of Fuller, Pal and Howard Hawks but unfortunately it absolutely does not make the grade either as an homage to those directors or as comedy-sci-fi in its own right. Trying to recreate the charm of 1950s B-movies it lacks excitement, thrills, and laughs and fails to deliver on what is actually a humorous concept. The limited budget is, regrettably, detrimental to the picture’s enjoyment with extremely clunky special effects and only the lead actor, Jim Knobeloch, managing the kind of absurdly earnest performance that the movie requires. You can’t help but admire him as he spouts lines like “Updike, I hope you packed Lederhosen”, but the moment that someone else speaks you’re abruptly reminded what it is that you’re watching.

Whilst the audience may not be expecting rounded characters in this type of thing, those on show are still terribly poor and are not helped by accents less convincing than the effects. Then there are the consistent botched attempts at humour (a rock the shape of a phallus anyone?) and an incident of sexual violence that does not need to be there for any reason whatsoever. The 25th Reich’s central plot does not even reach a half-way satisfying conclusion as the final moments, now taking place in the year 2243, see the giant-robot-spider-Nazi army (yes, there are giant-robot-spider-Nazis) departing for their next campaign in the sequel: The War with God. If said deity had any compassion, he’d have restricted this to a single film, but in the word’s of Knobeloch’s Captain O’Brian, “God’s absent without leave, Sergeant, or don’t you watch the newsreels?”