With the title Mozart’s Sister (2010), audiences could be forgiven for thinking that they are in for a historical biopic about Wolfgang Amadeus Mozart’s life through the eyes of his sister. Instead, René Féret’s problematic and historically questionable feature is a feminist examination of the difficulties of being a woman in the patriarchal society of 18th century Europe.

Mozart’s older sister, 15-year-old Maria Anna (nicknamed ‘Nannerl’), is portrayed to be equally gifted a musical genius as her younger brother, Wolfgang. The two children are chartered around Europe, demonstrating their talents, by their bohemian parents. After their carriage breaks down they retreat to a local convent where Nannerl befriends the daughter of Louis XV. This results in her travelling to the court of Versailles where she attempts to make a name for herself as a musician seeking to escape the shadow of her brother. 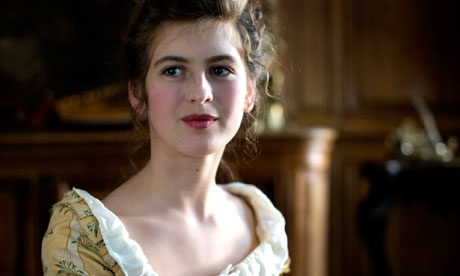 There is no historical evidence to suggest the Nannerl was as talented as her little brother and Féret seems to care very little for the historical validity of his project. Instead, the Mozart siblings are merely a catalyst for Féret’s treatise on feminism. Nannerl is portrayed as a definite character continually questioning her father over why she cannot be treated as the equal of Wolfgang. This is developed later as, for one reason and another, Nannerl cross-dresses in order to gain social advantage and demonstrate her skill as a musician.

Sadly this is not enough to make an entertaining film. There are many reasons why Féret’s film is unsuccessful, most notably the questionable and nepotistic decision to cast his two daughters, Marie and Lisa, as Nannerl and Louise de France. In one scene Louise wonders “What if we had be born boys”. The line is very weakly delivered and is just one example of both daughters’ stilted performance.

Aside from the awkward performances, Mozart’s Sister also falls incredibly flat in its weak development of almost all the central characters. The young David Moreau does a good job as Wolfgang but the character is disappointingly underused. In essence, Féret has shoehorned an interesting idea into an ill-fitting historical context, which beggars the question: why make it about the Mozarts at all?