Mikhail Segal’s Short Stories (Rasskazy, 2012) is an exhilarating cinematic ride that imbues social commentary with a rich understanding of the need for entertainment. When a young writer’s manuscript is rejected at a stylish publishing house, it somehow finds its way into the hands of various employees, with each of their lives curiously influenced by the prose it contains. We witness a meeting between a young couple and their wedding planner that rapidly descends into a life-coaching course, whilst an erotic encounter occurs between a young women and an older man who have far more than their noticeable age-gap separating them.

These distinctly different tales are linked by more than the four publishing professionals who read them, each presenting a characteristically Russian perspective on the changing face of society and painting a humorously droll portrait of the ever changing face of Russian identity. Normally, any film that presents the audience with an episodic anthology of stories struggles to maintain the same degree of audience interest throughout, often comprising of numerous highs and lows and failing to coalesce into one complete whole. Yet Segal has successfully achieved this tricky balancing act, intertwining four separate tales into one thoroughly entertaining whole. 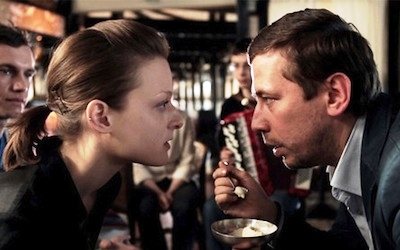 Combining concerns over the Westernisation of modern Russia with issues of corruption, the role of culture, religious belief systems and the widening generation gap between Soviets and non-Soviets, not only bestows us with a fascinating study of its country of origin, but also presents us with universal issues that just so happen to be magnified by the communal unrest in Putin’s Russia. Praise should well and truly be reserved for director Segal, who has not only directed each of these segments (showcasing a remarkably malleable methodology and a deft eye for composition), but has also successfully written a script that amalgamates a range of genres seamlessly – a remarkable achievement for such a young filmmaker.

Rarely has such an intelligent study of contemporary culture been quite so enjoyable, with Segal’s Short Stories tremendously satisfying on all available levels. This is instantly gratifying world cinema, with plenty of intriguing talking points to take away and chew over for days (or even weeks) after.