A metaphysical parable for the discontent felt by those under the ominous cloud of both social unrest and the crumbling European economy, Alexei Balahanov’s Me Too (Ya Tozhe Khochu, 2012) is a surprisingly droll take on Andrei Tarkovsky’s Stalker (1979), examining our inherent longing for happiness behind the mundane veil of despondency. Five passengers set off in a large black 4×4 in search of happiness. However, what might seem like a metaphorical road trip in search of an intangible sensation is in fact a carefully orchestrated pilgrimage to a mythical bell tower situated in a desolate area between Saint Petersburg and the town of Uglic.

According to legend, this mystical area makes people disappear into a realm of complete serenity or die from the Chernobyl-like levels of radiation that emanate from this former nuclear fallout site. Each of our band of reprobates (including a bandit, a punk rocker, a prostitute and a racist ex-army officer and his father) believes they will be chosen to ascend to this dominion of contentment regardless of their previous misdemeanours and their immoral behaviour – only time will tell if they are correct. 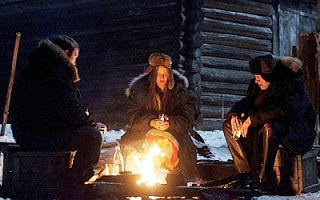 Balahanov, like many young Russian directors, is clearly influenced by the legacy of his cinematic forefathers, with Me Too undeniably improvising on Tarkovsky’s revered sci-fi parable. However, whilst many find themselves simply reconfiguring these ideas to suit a more contemporary cinematic fabric, Balhanov takes Stalker’s highbrow ideas and theories and dilutes them with a cocktail of black comedy and modern humour to create a jovial piece of social satire peppered with only the mildest taste of mysticism and existential musing.

Balahanov displays a taste for deviant characters, with many audience’s members no doubt unable to penetrate a film littered with such deeply detestable individuals. From their blatant homophobia, nonchalant racism or carefree views on violence there’s certainly plenty to sour your enjoyment of Me Too. However, its this failure to comply with science fiction archetypes that makes Me Too so compelling, offering us a passenger seat perspective on the type of individuals many of us believe hamper our enjoyment of the world, with their quest to depart this world ironically creating a better one for the rest of us.

The film’s somewhat monotonous soundtrack of Russian rock songs doesn’t help Me Too’s contentious approach either, however, it perfectly aligns with the film’s ironic humour and Balahanov’s incredibly cynical view of modern Russia. Destined to divide audiences, the film’s divisiveness is all rather fitting with its sad conclusion that we are all, in our own individual way, in search of happiness, yet unfortunately only very few of us will ever achieve it.