The Soul of Flies (2010) is a comic and at times poignant story of two brothers who have never met until their father invites them both to his funeral. Set amidst the Castilian plains of Spain, Jonathan Cenzual Burely’s whimsical directorial debut finds the two brothers stranded at a deserted train station. Stranded for the foreseeable future, they have little choice but to find their own way the small hillside chapel where their father’s funeral is taking place.

This Odyssey-like plot provides plenty of opportunity for Burely to indulge in surrealist and magical realist flights of fancy. The dead interact with the living, a girl dances in a field as she is rained upon by bright yellow post-it-notes and bands perform a pseudo dance macabre. Initially, this playful approach is pleasant and charming but, in what is a film of just over 80 minutes, this approach soon becomes trying and dull for even the most patient of audiences. 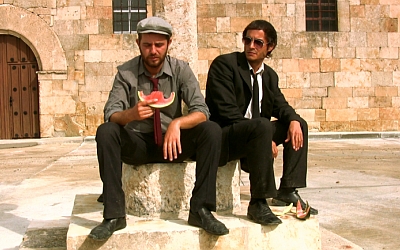 The Soul of Flies is certainly beautifully shot (also by Burely, credited as DoP), with a series of colourful and charming tableaux scenes that show off the stunning yet barren landscape of La Armuna. Burely is ambitious about how many themes he wants to explore in one film, and in order to deal with the family system, loss, memory and death, he utilises an episodic structure. Whilst each fragment is beautiful to watch, by shooting a series of vignettes the director has walked away from the central narrative, preferring instead to indulge himself in far too many random, fanciful tales.

Nonetheless, credit for what the director has achieved should be given. The Soul of Flies was made on a minimal budget using just one HD camera, one microphone and a crew of seven. The majority of the cast are non-professional actors and family friends, as are the musicians responsible for the score. The two brothers are juxtaposed in almost every aspect of their lives, dress, lifestyle, wealth, upbringing, and provide a level of comic conflict that drives the narrative forward. In addition, the music written by Tim Waters and performed by two bands – Monsters Build Mean Robots and Last Days of Lorca – is a strong, albeit invasive, aspect of the film.

Burely’s The Soul of Flies shows a great deal of promise for a first-time director, but as a feature in its own right, its enjoyable elements are jarringly disparate and fail to make for a successful whole. Perhaps a second feature will right the naive wrongs of this first outing.