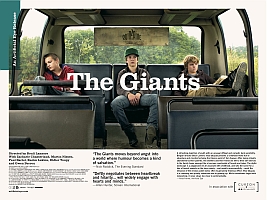 In a week chock-full of films featuring young central leads, Belgian effort The Giants (Les géants, 2011) is probably the most derivative of the established coming-of-age format. Not without its charms, former painter-turned-director Bouli Lanners’ drama is hampered by a somewhat plodding narrative, some stunted performances (outside of its titular trio) and unwelcome comparisons with the Dardenne brothers’ far superior effort The Kid with a Bike (2011).

We follow the unsupervised exploits of teenage brothers Zack (Zacharie Chasseriaud) and Seth (Martin Assen), along with their friend Dany (Paul Bartel), in the Belgian countryside. With the trio united by parental abandonment, the youngsters fill their days driving, shooting at ducks and smoking weed. However, their lives are irrevocably altered after Zack and Seth agree to rent their grandfather’s abandoned property to local drug baron Beef (Didier Toupy) and his thuggish henchman Angel (Karim Leklou) – who is also Dany’s older brother. With nowhere to go and no real future in sight, the boys become dependant on each other for strength, friendship and acceptance. 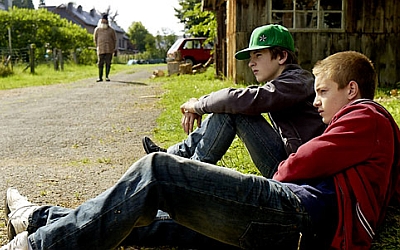 It’s not often that you see European cinema overtly tipping its hat to American produce, but The Giants is certainly more indebted to the likes of Rob Reiner’s Stand By Me (1986) than it is to Truffaut’s The 400 Blows (Les 400 coups, 1959). Whilst not quite stranded in the great wilderness, Zack, Seth and Dany have certainly made the rural Belgian woodland their own, a place to joke, fart and live out their adult-free teenage years. However, as with any idyll, they quickly find their own personal paradise barraged by the adult preoccupations of greed, violence and hedonism – which is where the film falters.

The sudden introduction of adult interference within the lives of the trio is almost as unwelcome to the audience as it is to the free-spirited teens. Both Beef and Angel are poorly-drawn, cardboard cut-out low-lives – violent, destructive and not a great deal besides. Whilst such clichéd spectres of impending adulthood can be put down to perception and point of view, balance is only fleetingly administered thanks to the occasional intervention of a kindly older woman and her Down’s syndrome house guest.

Whilst there’s little to be offended by and moments to admire in The Giants (Lanners’ painterly eye shines through on numerous occasions, predominantly those focusing on the elemental world that surrounds the three boys), it’s hard to recommend this film as anything more than a small-scale European folly. Then again, living in the towering shadow of the award-winning Dardennes is no easy task.