Film Review: ‘Seeking a Friend for the End of the World’

Both world-renowned US funny man Steve Carell and pouting British starlet Keira Knightley are tricky characters to pin down; he, with his ‘average joe’, exaggerated normalcy performances; she, with her endless period dramas and sporadic indie flops. Both are consistently imagined in their respective typecast roles, and sadly nothing seems to have changed with the arrival of Lorene Scafaria’s apocalyptic studio rom-com Seeking a Friend for the End of the World (2012).

With dashes of not-entirely-hopeless dialogue and a frenetic sense of pace, Seeking a Friend jump-starts with admirable aspirations to challenge apocalyptic notions and the clichés of romantic desperation. This hit-and-miss drama is based upon the premise that both lead characters are counting down to the impending apocalypse (quite literally it seems, as an awkward countdown timer informs us every so often). 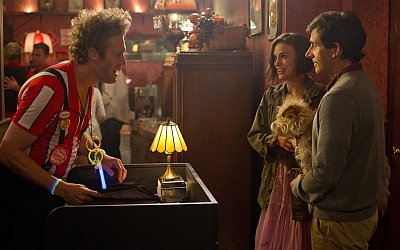 Two polar opposites meet one evening three weeks prior to an established and unavoidable end of the world. In order to define her bohemian nature and general quirkiness, Knightley’s dizzy and wayward narcolept (Penny) enters her destined lover Dodge’s (Carell) apartment through the window. Whilst very little may have been achieved in turns of challenging both Carell and Knightley’s on-screen personas, it’s not for want of directorial effort. In essence, Seeking a Friend is a wild attempt to make a romantic comedy dripping with that age-old, dreaded concern of ending up alone – whilst lifting the concept to apocalyptic proportions.

Whilst it may be worth a family-orientated watch on TV one wintry Christmas perhaps – if only for its PG-friendly nature and Carell’s stable stab at being more serious – Seeking a Friend is unfortunately ruined by a weird and boring trail-off during the middle act, which even manages to compete with 2000’s Dude, Where’s My Car? in terms of out-there subplots and ‘wacky’ bit-part players.

Ultimately, this convoluted rompocalypse seems unsure of what it really is, or indeed aspires to be. Considering such intense and serious subject matter, Scafaria’s Seeking a Friend for the End of the World is in dire need of more believable ‘star-crossed’ lovers and a more compelling reason for you to want their love to blossom – other than simply out of pure desperation.