More an exercise in reinforcing a legend rather than unearthing its roots, Kevin Macdonald’s reggae documentary Marley (2012) is an interesting, yet ultimately shallow and linear sweep through the life and work of Robert Nesta Marley. Nobody, but especially anyone who has a vested interest in maintaining the legacy, wants to tarnish the reputation of an idol. Any attempts to expose the flaws and fallibility of a figure like Bob Marley are bound to be handled carefully.

How many compromises, if any, Macdonald had to make to exec producers Chris Blackwell and Steve Bing is unknown. We are told about Marley’s numerous affairs and the distance between himself and his children is hinted at, but when the credits roll we are none the wiser as to what exactly made him tick. He remains an enigma. For those who are already well versed in the Marley story, this documentary is not as revelatory as many will have hoped it would be. 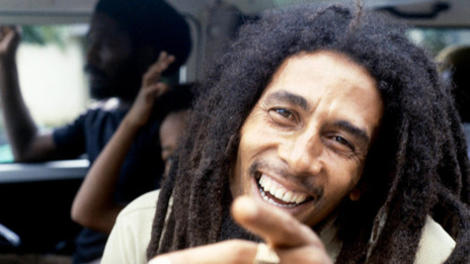 Then again, any brutal dissection of Marley would only give people who are unable to separate a man from his art an opportunity to cheapen his contribution to music, which is immeasurable. Marley might be a spiritual leader to some and a Marijuana poster boy to others, but he was, above all, a musician. Macdonald’s tracing of his progression from budding guitarist to global superstar forms the central spine of the film, but although we are shown plenty of concert footage, it is remarkably light on music.

His role as a political figure is rightly borne out as part of the narrative, but there is very little insight into his craft. Where did the poetry of this barely-educated Jamaican come from? What is the story behind some of his great tracks such as Redemption Song, Exodus and Get up, Stand up? Macdonald chooses not to go down that road, which is the main reason why this is a good Marley documentary rather than the definitive Marley documentary. In fact, it’s arguably inferior to the BBC film Exodus ’77 (2007), which focused on the making of his most famous album.

All in all, Macdonald’s Marley is one for Bob virgins rather than converts. It remains a sound introduction to one of music’s greatest icons, though it simply massages the skin of the man when, given an optimum forum on which to do so, it should have pierced it.

Win a copy of Kevin Macdonald’s Marley with our brand new competition. Follow the link to enter.