Icíar Bollaín’s 2010 film-within-a-film Even the Rain is a political drama set during the Bolivian Water Wars of 2000. A labour of love, by screenwriter Paul Laverty’s own admission, having been ten years in the making, Laverty’s own script went through several re-writes until the film went into production. It was entrusted not to director Ken Loach, but Bollaín, whom Laverty met whilst filming Loach’s Land and Freedom (1995).

Gael García Bernal plays Sebastián, an idealistic young filmmaker who lands in the Bolivian countryside, film crew in tow, ignorant to the severity of the civilian unrest brewing in the near-by city of Cochabamba over the privatisation of water. They are there to capture the early explorations of Christopher Columbus and the Spanish establishment of the New World, with a view to emphasise the horrific treatment the natives suffered at the hands of the Christian invaders. The role of Hatuey is entrusted to Daniel (Juan Carlos Aduviri), the defiant leader of the civilian revolts whose character led the uprising against the Spanish, a parallel that pleases Sebastián at first until Daniel’s arrests (and bruises) prove problematic to the film schedule. 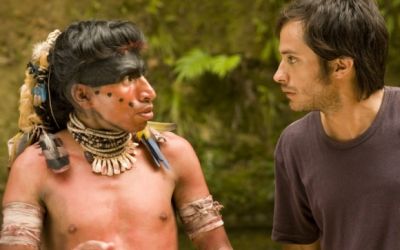 Director Bollaín has the difficult task of presenting the parallels between complex stories whilst keeping the plot lucid, and handles the material remarkably well. The exploitation of the Taíno tribe for gold compared with the Bolivian’s fight for water is intended to support Laverty’s ‘fifty men’ metaphor – the continuing idea that, throughout history, very few gain from wide-spread oppression, but gain handsomely. Yet whilst Even the Rain’s script is engaging and fluid, the political stance is rather heavy-handed which makes for a few unconvincing scenarios, a rare critique for a writer like Laverty.

Bernal’s portrayal of Sebastián is a solid one, but he is over-shadowed by co-stars Tosar and Aduviri. Tosar marvelously embodies the cocky, cynical producer Costa and manages to avoid an overly sentimental performance when his priorities shift (an albeit unconvincing change of heart, but the fault lies in the script). Newcomer Aduviri has a strong, pertinent on-screen presence who only speaks if he has a point to make but whose striking face easily transcends through ages. Most notably, however, is the cinematography from Alex Catalán – a huge part of the film’s overall success.

Whilst Even the Rain could have benefited from pulling back a little to appreciate the complicated political situation rather than honing in on the abscesses, Bollaín’s South American saga is an undoubtedly passionate projection of the prevalence of the human spirit and the importance of integrity, something we are seeing less and less of in mainstream cinema.