Some films just leave you feeling sullied, and sadly Paura 3D (2012) is one such monstrosity. It would be good to find something positive to say about this faux-giallo by the Italian Manetti brothers – behind the far-superior sci-fi The Arrival of Wang (2011) – but sometimes words just fail you. If you see one Manetti brothers film at the 13th edition of Film4 FrightFest this year, makes sure it’s Wang – and count yourself lucky for having avoided their dire follow-up feature.

Young mechanic Ale (Domenico Diele) overhears a conversation between his boss and a rich client, the Marquis Lanzi (Pepe Servillo). Lanzi wants them to service one of his vintage cars whilst he’s in Switzerland for the weekend. Sensing an opportunity for a party, Ale and his mates Simone (Lorenzo Pedrotti) and Marco (Claudio Di Biagio) head for the secluded mansion outside Rome, and begin making themselves at home. 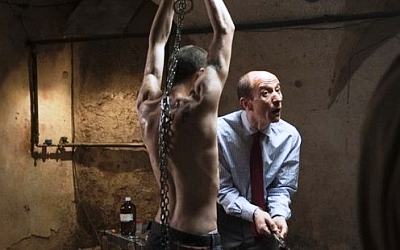 Whilst Ale and Marco are raiding the fridge and making good use of Lanzi’s home entertainment system, Simone heads downstairs to check out the wine cellar. Rooting amongst the bottles of vintage claret and champagne, he comes across a bolted door from behind which are emitting some very peculiar noises – and thus, it suddenly becomes clear that the boys might not be as alone as they first thought.

Everything about Paura 3D, from the flimsy plot to the onslaught of gratuitous violence, is sickening. In-your-face visceral imagery is certainly acceptable when they’re there as a result of a strong story – indeed, they can add an extra frisson to proceedings. It is, after all, the core narrative which makes you sympathise for the characters and the predicaments they find themselves in, giving any film a sense of purpose. However, when what little story there is simply functions to join together a series of nauseating set-pieces (a la Paura), it can easily leave the viewer questioning, “What’s the point?”

A promising pre-credit sequence gives initial hope that the Manetti’s latest outing might run along the lines of a ‘beast in the cellar’-style shocker. Tragically however, such potential fun is lost after the film turns into one long torture-porn trip for both characters and viewers. An invite to Paura 3D’s illicit party is definitely one RSVP that you’d be far better off passing on.