Towards the end of the Second World War, German scientist Klausener (David Gant) is shown working on the creation of a Nazi army of zombie super-soldiers. Jump forward to the modern day and a feisty young investigator called Helena (Steadman) is searching for the infamous war-criminal Klausener, whom she believes may still be alive. By chance, she finds herself in the same area of Eastern Europe as Wallace (Coyle), a man who has also been on the trail of Nazi war criminals for years. 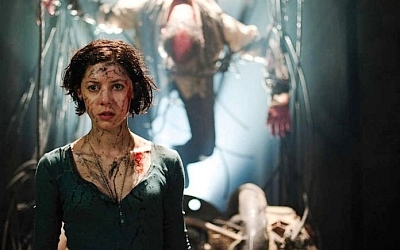 Reluctantly, the pair pull resources and, with the help of a Special Forces Unit, the two unlikely comrades venture deep into no-man’s land where they discover something more evil than even they imagined. Waiting for them in the wilds of Eastern Europe are an army of undead Nazis, created with the sole purpose of establishing a 4th Reich which will then be unleashed upon the unsuspecting world.

For a movie centrally concerned with a horde of zombie Nazis, Outpost II is perplexingly boring for the most part, with barely anything distinctly frightening or interesting happening for enormous stretches of the film. Still, as most of the action takes place within a warren of dimly-lit tunnels, which seem to run either into each-other or into dead-end rooms, it’s also extremely hard to tell exactly what is going on half the time. The human characters (including the normally impressive Coyle) are also disappointing, the majority of whom are almost as lifeless as the zombie fascists they’re supposed to be fighting.

The only vaguely impressive aspects of Outpost II are found in its production design, with the central power room from which the undead hokum radiates particularly stylish and intriguing. However, one effective scene does not a good film make and, on this evidence, it appears to be time to let the sun set on this particular niche area of zombie horror.