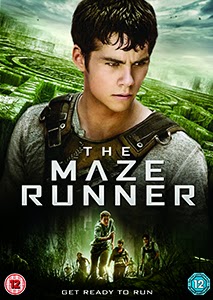 Another year, another Young Adult book series optioned and adapted to spin into a trilogy (or more!) of action-packed and spectacular films. Based on James Dashner’s novels, Wes Ball’s The Maze Runner (2014) depicts the nightmarish dystopia of a peaceful forest glade populated exclusively by school-age boys. The daily routine of building, farming, and running frantically through the enormous, monster-housing maze which surrounds the glade is interrupted by the arrival of new boy Thomas (Dylan O’Brien of MTV’s Teen Wolf series) in a terrific, disorienting opening sequence. Thomas is introduced to a handful of the glade’s community. 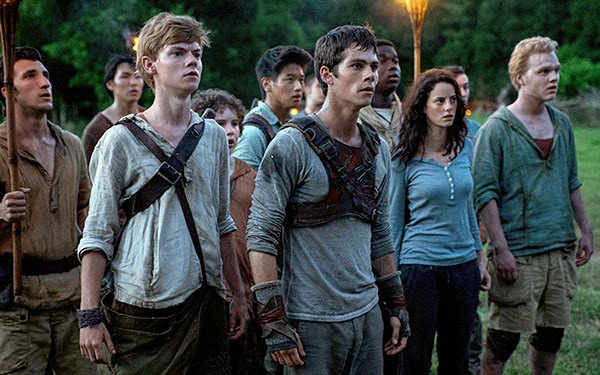 Their leader is Alby (Aml Ameen); second-in-command is Newt (Thomas Brodie-Sangster); Gally (Will Poulter), is an aggressive stickler for the rules; and adorable there’s li’l Chuck (Blake Cooper) who eagerly slips into place as Thomas’ sidekick. There’s also Minho (Ki Hong Lee), leader of the Maze Runners of the title, whose responsibility it is to map the maze. These pieces in place, The Maze Runner goes about its early business at a brisk pace. Questions are raised about the world, but nobody has any memory of their lives before they came to the maze. Only Thomas seems curious to find answers, which pushes him into conflict with the settled and comfortable Gally. Just as Thomas begins to unearth some clues, things are thrown into further disarray by the arrival of Teresa (Kaya Scodelario).

The first and only girl in the glade, Teresa is useless. This is intended less as an insult, than an insinuation that her character achieves nor even attempts anything of note. The same is true of Newt and Chuck, two prominent players whose function is largely that of exposition. The Maze Runner‘s director and three credited screenwriters (Noah Oppenheimer, Grant Pierce-Myers, and T.S. Nowlin) do a good job of establishing each character’s personality and voice but when it comes right down to it very few of them contribute much to narrative progress. Only Thomas, and to a lesser extent Minho, even have the ambition of accomplishing something.

That said, Ball stages the actual maze running well, injecting panic and purpose into what must largely have consisted of O’Brien and co. dashing madly between walls of green screen. The Maze is appropriately eerie and the early scenes are very atmospheric. After stalling on answering any questions for the majority of its runtime, the few answers which aren’t held back for the pre-ordained sequels are unsatisfying and provided in the most perfunctory way imaginable. It’s frustrating: from moment-to-moment, in the thick of the action, The Maze Runner is an admirable success. The ending is a grind-to-a-halt, here’s-what’s-happening rug pull that reveals all of the cracks that run back through the rest of the movie. What might have been an effective teen thriller is betrayed by itself.