Outside Academy Awards hopeful Trouble with the Curve (2012), helmed by Clint Eastwood’s longstanding producer and friend Robert Lorenz who now directs the aforementioned American cinema icon, is a token sports-cum-family drama about the woes of a legendary, ailing baseball scout now entering the twilight years of his illustrious career. Protagonist Gus Lobel (Eastwood) is under threat of being put out to pasture by the Atlanta Braves as his eyesight starts to fail him. Despite his ocular woes, Gus is determined to stay in the game and goes on a final scouting tour to examine a young Ty Cobb in the making.

Gus’ concerned daughter Mickey (Amy Adams), with whom he shares a fractious relationship, abandons her law firm to help out her dad, providing years of passively accumulated knowledge of the game in the process. When they arrive they encounter new Boston Red Sox scout and ex-major league pitcher Johnny (Justin Timberlake), who is also gunning for the new talent. Eastwood’s grizzled charm lends itself perfectly to the cantankerous Gus, whose defiance in the face of old age manifests in scenes where he rolls his Cadillac out of the garage and/or chomps down on an endless supply of cigars. This makes for a great character for Adams’ spunky Mickey to bounce off, gradually revealing the resentment she feels towards her absent father in the wake of her mother’s death. 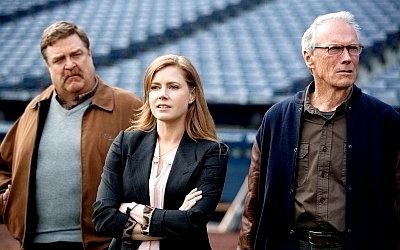 This relationship echoes the wider theme of age in the movie, where all the characters under thirty persistently bury their heads in their Blackberries and insist on the infallibility of computers to predict the game. Lorenz’s Trouble with the Curve is, for the most part, all a bit too hammy, preaching a simplistic message of how it was better ‘back in the day’. Nevertheless, this note of nostalgia lends a certain charm to Randy Brown’s script, and is accompanied by sharp camera work from Tom Stern, who beautifully captures the seedy bars and provincial stadiums’ grubby white and emerald green pitches.

Whilst there are notably pleasing aspects to this tale, this is no Moneyball (2011). At its best it is functional Sunday evening fodder. The handling of the themes feels shallow with little grit, and whilst the main cast (including the ever-reliable John Goodman) are entertaining enough you can’t help but feel they all see this as a filler movie career-wise, rather than a project with passion. The plot trundles along with inevitable predictability and the antagonist, in the form of Matthew Lillard’s greasy Phillip (a young buck with dreams of taking Gus’ job), is just too creeping and nasty. Essentially this is a tired exercise in out-dated storytelling that lacks any level of peril or excitement.

Unfortunately, Lorenz’s Trouble with the Curve is too self-satisfied, too functional, and whilst watchable is equally forgettable for its inevitability. A not quite charmless, but ultimately disappointing swing and a miss from Eastwood, Adams, Timberlake et al.