Frank Harper is most well known for appearing in Lock, Stock and Two Smoking Barrels (1998) and The Football Factory (2004), and it’s to cockney gangsters and football hooligans that he turns in his directorial debut, St George’s Day (2012). The result is a fairly unremarkable crime caper that boasts production value and an impressive cast but is hampered by a sub-par script.

Things kick-off with middle-aged cousins, Mickey (Harper) and Ray (Craig Fairbrass), who sit atop the pile as the London gangster scene’s star players. They’ve helped advance the family business, which used to focus more on terrace argy-bargy, into a crime empire that means that they constantly have the old bill on their tracks in the form of the persistent Nixon (Jamie Foreman). Things take a turn for the worse when a drug run goes south and they end up in millions of pounds of debt to Vlad who is played by Zlatko Buric – and we all saw how it turned out for Kim Bodnia when he owed Buric money in Pusher (1996). 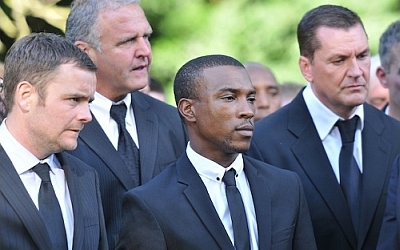 The plot is further complicated by a great swathe of supporting players of various kinds that sees Charles Dance, Vincent Regan, Neil Maskell, Keeley Hazell, Luke Treadaway, Dexter Fletcher, Nick Moran, Ashley Walters and Sean Pertwee all making appearances of varying sizes. Alas, the plethora of faces does little to disguise who the grass is when they discover that one of their firm is tipping off the fuzz.

Whilst the cast all put in satisfactory performances, many of the characters in St George’s Day are utterly superfluous and the intricate plot never quite manages either to convince or thoroughly engage, let alone keep the audience guessing. Although the film flits through a succession of nice locales, taking in The ‘Dam (Amsterdam) and Berlin as well as various London hot spots en route, the direction is fairly perfunctory and little leaps off the screen at you.

Harper’s influences are clear and references are made to various American gangster films, with Donnie Brasco (1997) even getting a name-check, but the finished product feels more like those Brit crime flicks that we see so much of these days. It’s not awful, but St George’s Day fails to stand out other than in its cast list and it certainly doesn’t manage to compete with Wild Bill (2011), the directorial debut of fellow Lock, Stock alum, Dexter Fletcher, that came out earlier in the year.