In competition for the Golden Lion at the 69th Venice Film Festival, Valeria Sarmiento’s 150 minute-long Portuguese historical drama Lines of Wellington (Linhas de Wellington, 2012) is a large plodding europudding of a movie. The film opens with the battle between the British and Portuguese forces against the French at the battle of Bussaco. Although winning the battle, the allied forces have to retreat in the face of Marshal Masséna’s superior numbers towards the secret fortifications of the Torres line.

In the midst of the retreating army, several individual stories are told. A lieutenant who has been wounded and left for dead in a hospital; a tinker and a young boy he bullies; a gung-ho sargento (Nuno Lopes), who curses the Jacobins with a personal virulence and wishes to protect the young widow of an English soldier who fell in the battle; an English officer who engages in a romance of sorts with a young lady (Victória Guerra) travelling with her sick father. 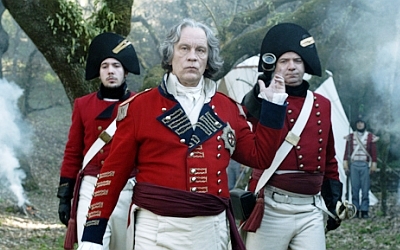 Originally conceived by the late Chilean director Raoul Ruiz, Lines of Wellington was realised by his wife Valeria Sarmiento. Although it’s handsomely mounted, it also has several damaging flaws. One seems to be due to its status as one of those multinational co-productions which sees characters inexplicably switching to different languages depending on the nationality of the actor. Some of the English line readings are not much better than bad movie dubbing, and render dramatic scenes unintentionally hilarious.

The best of the more recognisable cast members is US actor John Malkovich as Wellington, who enjoys playing the famous general as a pompous and vain martinet (slightly reminiscent of General Custer in 1970’s Little Big Man), who in one wonderful scene describes the precise recipe for Beef Wellington to his long-suffering portrait painter. However, other famous faces such as Michel Piccoli and Catherine Deneuve appear for little or no reason except perhaps as a nostalgic call back to former collaborations with Ruiz. At least they have a nice scene together – poor Mathieu Amalric turns up to show Masséna his room and then almost get hit by a cannon ball.

The biggest problem with Lines of Wellington is, however, no fault of the director or cast. The retreat to the lines, the meandering and the development need a real big battle at the end to resolve things, but as Masséna lost his nerve in front of the fortifications, the battle never happened and so the film ends with fizzle and smoke. In telling the story of the retreat, it was perhaps inevitable that it would end up feeling like a bit of a slog.