Henry Alex Rubin follows up the Oscar-nominated Murderball (2005) with Disconnect (2012), a multi-strand narrative film dealing with the impact of social media on a diverse cast of interrelated characters. Two high school students fool a lonely classmate into believing that he has a female admirer; a grieving couple, (Alexander Skarsgård and Paula Patton) are the victims of identity theft; and Kyle (Max Thieriot) sells himself via chat room until his story is told by a crusading journalist (Hope Davis).

The central thesis is summed up in the title. Overloaded by access to social media and the addictive nature of instant communication and networking, we are actually losing touch – becoming disconnected – with the people in front of us. Jason Bateman plays the lonely boy’s father and corporate lawyer, who comes to realise the value of family in the midst of communication overload sums it up in the line: “Everything I love is in this road.” 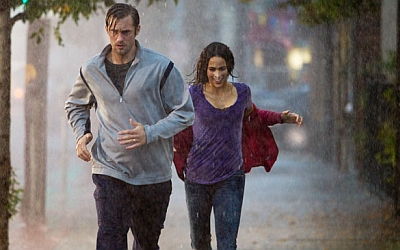 Of course, the point is made in a not over-subtle way and as with Paul Haggis’ Crash (2004), there is the feeling that some of the connections beggar belief. Inevitably, all the strands will come together in a moment. Although not by any means subtle with its front loading of the message, the film, scripted by Andrew Stern, is not without its nuances. It does not fall into the trap of making the problem generational. The most competent IT guy is the dad of one of the high school bullies. Kids text at the table, but so do parents.

The lonely kid is a victim of technology but his musical talent also flourishes because of it. This is not a straightforward Luddite message. The point is our social consciousness has not kept pace with new problems that technology has thrown up. The ubiquity of new technology and gadgetry is well done, with GPS iPhone apps, Google and Facebook being used throughout. Some of the tensest scenes of dialogue are actually written on the screen as texts or social messaging. Pauses are now “John is typing…”

Ultimately, the strength of Disconnect lies not in its plausibility. It would be all too easy to pick holes in the plot – the authorities are conspicuous by their absence or in one case their criminal ineptness. Yet the performances are uniformly excellent, whilst the music by Max Richter adds a great deal to the emotional heft of Rubin’s latest endeavour.