‘Beat’ Takeshi Kitano returns to the Venice Lido this year with Outrage Beyond (Autoreiji: Biyondo, 2012), a sequel to his 2010 gangster drama Outrage. Writing, directing and editing, Kitano also stars as Otomo, a jailed Yakuza whose imminent release is making the Sanno family jittery. Both a nightclub hostess and a cop mixed up with the mob have been murdered, whilst scheming corrupt policeman Detective Kataoka’s (Fumiyo Kohinata) Machiavellian scheming seems set to cause a war between the Sanno and Hanabishi families.

The first half hour of Outrage Beyond will be confusing to anyone who hasn’t seen the first, and one wonders if this wasn’t Kitano, whether such a film which is so much a sequel would be admitted into the main competition. That said once the characters have been stabilised, and it is one of Kitano’s strengths as a director that he can make an often numerous cast immediately recognisable and diverse, the scheming begins to take on its own momentum. 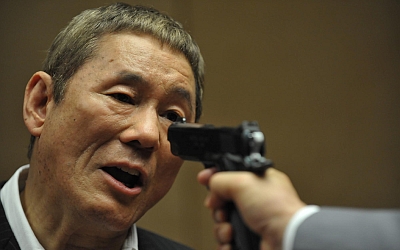 With Otomo free, a violent showdown is promised and promptly delivered. Kitano has been doing this kind of role since his debut film Violent Cop back in 1989 and it is a joy to watch the old guy getting his mojo back. Despite the inevitable “I’m too old for this shit” line, Otomo once free and in the mood for a rumble, faces down his opponents with often hilarious aplomb. My favourite line of the festival is his: “I’m not disrespecting you, asshole.”

The violence is delivered with the usual Kitano flourishes of dark twisted humour, while at the same time being no less violent for all that. The story twists around intrigues and counter plots that make the Yakuza war feel like a giant fatal chess game. Game playing has always been a part of the approach to cinema and the corruption of the police makes the whole thing feel an amoral obstacle course littered with corpses.

Having won both the Golden and Silver Lion in the past – for Hanna Bi (1997) and Zatoichi (2003) respectively – as well as a Lifetime Achievement award, it’s hard to see Kitano’s latest making that kind of a stir in 2012, nor is it likely to convert those not keen on the director’s his previous work. However, for fans and admirers, Outrage Beyond is a worthy late addition to the canon and a hell of a lot of fun.