Jee-woon Kim and Pil-Sung Yim’s portmanteau film Doomsday Book (2012) started production in 2006 when the first two segments of the piece were complete. Fortunately – or perhaps unfortunately – a year later the directors were able to raise funds for the third part of the anthology of shorts. All three shorts that make up Kim and Yim’s own Doomsday Book are a critique on modern living in some form or another, a quasi-pithy take on well-established genres – with the first applying a unique spin on zombie apocalypse.

The inaugural tale is a critique of modern food consumption, focusing around a young, somewhat hapless, military scientist who starts a zombie virus. A series of shots show the journey of recycled waste which moves from collection, to processing, to animal feed, and finally to the butchering of said cattle which are then consumed by humans. In a surreal twist, this process morphs into the deadly virus turning the inhabitants of the city into bloodthirsty zombies. 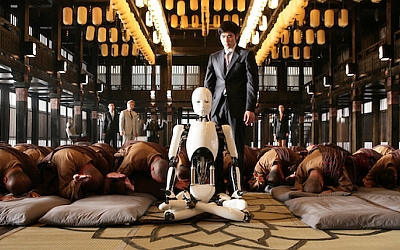 The next short depicts the spiritual tale of a robot in the near future who believes himself to be the next incarnation of the Buddha, yet faces destruction from the corporation which created him. The robot design reeks of I, Robot (2004), and the piece as a whole takes itself all too seriously – and yet not seriously enough. Lastly, there is a comical spin on the disaster movie where a young girl accidentally orders a gigantic eight ball that threatens to destroy the Earth, and is undoubtedly the most enjoyable of the three.

Whilst there is some wacky enjoyment to be found on the surface of these stories, the philosophical message contained beneath each of these surreal shorts is shallow at best. Worst is undoubtedly the second feature, where the pitting of spirituality versus corporate lifestyles is lacking in any depth, and the attempts to build tension fail at every turn. The jabs at the media and modern culture, found in the first and last shorts, are playful and occasionally witty, but are equally cheap and insubstantial. As a triptych, the structures fails to cohere into a form that warrants a feature. This makes for frustrating viewing as the presentation is lavish, on an equal footing with a big budget feature, but the substance is found wanting.

It’s not hard to see why Jee-woon Kim and Pil-Sung Yim struggled to complete their ambitious Doomsday Book, as it must have been hard to justify the funding for these polished but unfulfilled shorts. There remains a niggling feeling throughout that the assembled shorts would be have been more successful released individually.