Grease (1977) cult director Randal Kleiser’s time-travelling tale of one boy and his sentient spaceship was a VHS favourite back in the day, and its Blu-ray rerelease is bound to cause a raft of post-30 movie fans to get all misty-eyed and nostalgic over a childhood gem. Featuring a distinctly recognisable soundtrack courtesy of Alan Silvestri (including The Who’s Baba O’Riley) and cutting-edge visual effects which still charm and impress, Flight of the Navigator (1986) is one of the quintessential 1980s family films, arguably up there with the best of the Spielberg-influenced kids flicks that hit cinema screens throughout the same decade.

Our young protagonist David (Joey Cramer) is walking through the woods to pick up his younger brother when he slips into a ravine and falls unconscious. Returning home after what he assumes is only a couple of hours, he discovers that he’s somehow travelled eight years forward into the future. Taken into hospital for tests, doctors reveal that David’s brain contains knowledge of extraterrestrial species and star charts of unexplored regions of space. It also just so happens that an alien spacecraft has recently crash landed on Earth – thus, the hunt begins. 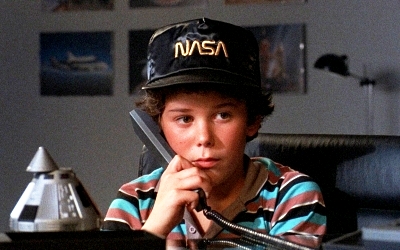 Flight of the Navigator is essentially your classic schoolyard sci-fi fantasy ripped from the pages of your favourite comic book series, with Kleiser capable of making flying around in a spaceship with a wise-cracking, phallic alien oculus seem like the most fun a 12-year-old kid could possibly have. Cramer doesn’t have to do anything complicated or showy; just express a wide-eyed wonder that young audiences can identity with. He subsequently does this with aplomb – which makes his subsequent slide into movie obscurity all the more puzzling.

It’s difficult to deny that Kleiser’s Navigator looks dated, and the relatively poor Blu-ray transfer does nothing to help the ageing process, yet the spacecraft design is still awe-inspiring and the dialogue adult and refreshingly non-patronising. In fact, one of the film’s biggest claims to fame is that it was the first Disney picture that contained swearing, with the scandalous profanity “shit” making a double appearance.

If you’re a parent looking for a Sunday afternoon movie to enjoy with your nearest and dearest, Flight of the Navigator is old-fashioned entertainment with bags of heart and would make a welcome addition to your collection. It might have weathered somewhat with age, but its cracks and creaks only add to the film’s endearing charm and sense of nostalgia – “See you later, Navigator!”.