Back in 1984, Steven Spielberg and George Lucas’ iconic whip cracking hero returned once again in the pursuit of fame and fortune in Indiana Jones and the Temple of Doom, the prequel to the hugely successful Raiders of the Lost Ark (1981). No sooner had the director called cut, the censors – both in the US and the UK – were making and fuss and they found more than a few problems with the intrepid hero’s latest adventure. Opening to an extravagant big band musical number in a seedy Shanghai nightclub, Indiana Jones (Harrison Ford) dodges death at the hands of a local crime cartel, only to board a plane owned by the very gangsters he is attempting to flee.

Tagging along for the doomed flight is young Indie-in-the-making Short Round (Jonathan Ke Quan) and wily nightclub singer Willie Scott (Kate Capshaw, whom Spielberg later married), who awaken to find the plane abandoned, eventually crash-landing on the shores of a desolate Indian village. The locals recount tales of the Thuggee cult at nearby Pankot Palace and a sacred stone that has resulted in famine and misery across the land. Ever the treasure-hunter, Indiana agrees to retrieve the stone and the village’s brainwashed children. Entering into the walls of the imperial palace, our fedora-capped hero discovers the devilish practices of Mola Ram (Amrish Puri) and Chattar Lai (Roshan Seth), who aim to cast a dark shadow across the land. 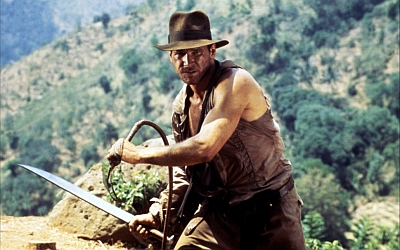 Most surprising about Temple of Doom is just how dark Spielberg took the story in the original cut. Audiences not only witness the local nobility nosh down on chilled monkey brains, but also see Harrison Ford glug down blood and watch a man have his heart pulled out of his chest (remaining alive), before being cast into a fiery pit. These scenes are affective and intense, but strange when you consider that Spielberg was openly looking for a PG certificate. For once, it’s easy to see why the censors complained. The effects haven’t aged quite that well and have lost some of their potency, but the frequency of satanic ritual, child abuse and horror (particularly in the temple itself), are strong for a film aimed at the young boys market.

Whether you believe that a little gore and Hollywood violence would negatively affect young children (or encourage racial stereotypes), the other question to hand is whether the uncut version is a better movie than the general cinema release – yet sadly it isn’t. The tone becomes too dark, too intense and ultimately is unwarranted. The success of the Indiana Jones trilogy (now a quadrilogy, but let’s stick to the classic initial three) is in its lightness of tone and great, well-drawn characters. Often comical and always action packed, Indiana Jones is about heroes, villains and a sassy love interest – not overt horror.

Seeing the uncut rendition of Indiana Jones and the Temple of Doom feels like more of an academic endeavour, but worthwhile for those who are lovers of the original action hero-cum-archaeologist. As soon as you see that weather-worn leather jacket and tattered fedora (both of which incidentally are currently contained in the current V&A’s exhibition, Hollywood Costume), you know that you’re in for a thrilling, family-friendly ride.