This March/April sees the BFI pay tribute to one of the UK’s most enduring and beloved directors. John Boorman has never been the type of filmmaker to be tied to one genre, hopping between a number of diverse projects which have ranged from the world of science fiction/fantasy (1974’s truly mind-bending Zardoz) to the coming-of-age yarn (1987’s bittersweet, semi-autobiographical Hope and Glory). Scoring his first mainstream hit with the swampy, Deep South-set classic Deliverance (1971), it was his second feature and US debut, Point Blank (1967), which signalled the arrival of a truly iconoclastic talent.

Completely eschewing the more straightforward narrative of the aforementioned Deliverance, Point Blank is an example of Boorman’s refusal to play by the cinematic conventions of the time (or of any era, for that matter). The film failed to find much of an audience when first released, and it’s easy to see why. It’s an incredibly stylised, and at times (purposely) obtuse picture, not only from a visual perspective, about also through its sometimes jarring use of non-linear structure. That narrative construct clearly runs through the DNA of much of Steven Soderbergh’s filmography, especially 1999’s The Limey. 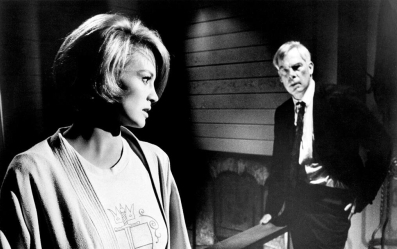 Hollywood A-lister of the time Lee Marvin plays a hard-ass gangster known as ‘Walker’ who, in a pre-credit sequence, is framed and left for dead by both his partner-in-crime and unloving wife in the deserted and dilapidated prison setting of Alcatraz. Surviving the encounter, Walker heads back to the mainland with two things on his mind – revenge and the change to get back the share of money he’s ‘owed’. Tangling with a mysterious corporation, he leaves a path of bodies and destruction in his wake, enlisting his hesitant sister-in-law (Angie Dickinson, possessing a kind of sexual/vulnerable prowess that contemporaries like Scarlett Johansson could only dream of channelling) to help him on his quest.

Point Blank’s action flits between LA and San Francisco as the gangster engineers his plans and Boorman conjures a fractured, dreamlike ambience, where everything feels dislodged, and not quite what it seems. The film offers some truly stunning compositions and incredible uses of widescreen, both of which are evident in the beautifully stark opening credits (which also offers a possible symbolic interpretation of where Marvin’s character may actually be residing). At other times, the director gives his film a loose, New Wave feel – further proof of his refusal to follow the rules.

Pre-dating the release of Dennis Hopper’s 1969 American counter-culture classic Easy Rider by two years, Boorman’s Point Blank is also a very trippy, psychedelic affair. Marvin fending off two assailants behind the colourful, swirling backdrop of an avant-garde jazz gig is an evocative snapshot of that period, and just one of the many fetchingly abstract moments this strange and beguiling picture has to offer.