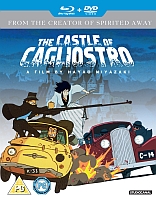 All the old Hayao Miyazaki magic can pleasingly be found in the Studio Ghibli director’s 1979 debut feature film. Well, almost all of it, because The Castle of Cagliostro is that rare thing in the animator’s canon: a film without that quintessential female protagonist. Our lead here is Lupin – Arsene Lupin III, to give him his full, grandiose title – gentleman thief, lovable rogue and master of disguise. We can tell immediately from the opening sequence, which sees Lupin leap off a cliff to rescue a damsel in distress, that’s he’s pretty gosh darn awesome. That and the fact that he wears a bright yellow tie.

Soon enough, his princess-saving endeavours lead him to something else entirely: the Italian castle of the title and the counterfeiting mastermind who lives within. The only problem? Dogged police detective Zenigata, who won’t stop chasing him. If this all sounds a bit like an epic TV show, that’s because, in a way, it is. Hayao cut his teeth on the anime Lupin III, which ran for several series, before attempting the franchise’s third feature-length spin-off. 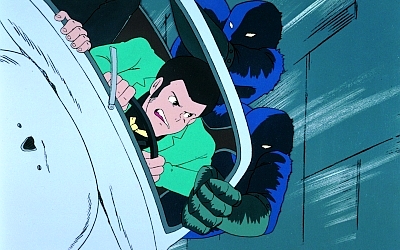 The characters are fleshed out with the wit and charm of someone who’s familiar with their foibles, weaving in back-story with almost zero exposition, while the set pieces are better than most live action blockbusters, zipping along with all the enthusiasm you would expect of the young Spirited Away (2001) director. Amid all the excitement and genuine laughs, the animation suffers a little; the humans may be all bright colours and sharp angles, but some of the backgrounds are overly simple. Add to that the odd stint of awkward dialogue during the climax and you might think you’re in for a lesser Miyazaki creation.

However, what’s amazing here – especially when you check out the picture-in-picture storyboards included on the Blu-ray – is just how accomplished this is. The landscapes may not be that detailed, but each frame is packed with imagination. Rooms, cars, clothes, rings. Almost everything has a hidden trap door. The rumour that Spielberg is a big Cagliostro fan may not be true, but it would make a lot of sense if he is.

Of course, even in these early stages of his career, Miyazaki was no spring chicken. He was 38 at the time this was made, almost half the age of his future Oscar-winning self, but The Castle of Cagliostro is a testament to the enduring childlike genius of one of animation’s all-time legends. The final frames offer a taste of the environmental maturity that was to come, but this eager caper is as fast and fun as cinema gets.