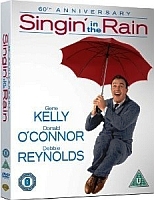 Featuring a host of sparkling musical numbers and several iconic set pieces, Stanley Donen and Gene Kelly’s 1952 masterpiece Singin’ in the Rain is undoubtedly one of the finest musicals to have come out of Hollywood. Earning both critical and popular acclaim in numerous polls and lists, it’s a film that has the ability to put a spring in your step and make life seem all that much sweeter. This year sees the film’s 60th anniversary, celebrated with the release of a new Blu-ray collector’s edition – the jewel in the crown being a spectacular new restoration that pops with vibrant yellow and blue hues as well as crystal clear sound.

The year is 1927 and we are poised to enter both the Golden Age of Hollywood and the dawning of the ‘talkies’. Don Lockwood (Gene Kelly) and Lina Lamont (Jean Hagen), on-screen lovers adored by the public, are at the zenith of their careers, but with the advent of sound their stardom is under threat. The problem is that Lina, whilst easy on the eye, has a shrill voice that would have audiences rolling in the aisles. Fortunately, Don happens upon the beautiful Kathy Seldon (Debbie Reynolds), a chorus girl hungry for fame with the voice of an angel. 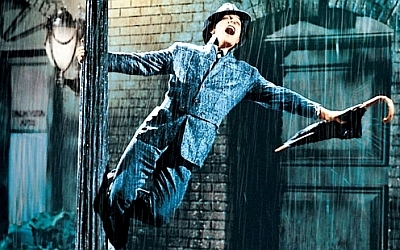 In order to save his latest picture, Don and best friend Cosmo Brown (Donald O’Connor) convince Kathy to provide the voice to Lena’s on-screen performance – but will Lena agree to share the limelight? The magic of this timeless musical lies not just in Kelly’s breathtaking dance numbers or the plethora of now classic songs (provided by Arthur Freed and Nacio Herb Brown), but in how it captures the glory of Hollywood in the transition from the silent film to talkie era. Behind Singin’ in the Rain’s charming central characters, Donen throws the studio system up onto the screen for all to see. Consequently, this comic, postmodern dissection of filmmaking exposes a singular truth – cinema is a beautiful lie.

Reynolds’ voice was, ironically enough, dubbed for her numerous songs and dance sequences, providing an enjoyable added twist to the tale, especially on a re-watch of the triumphant final showdown between Lockwood and Lamont, whilst the rest of the film’s musical number lineup (choreographed by Kelly himself), are now the stuff of movie legend. From the slapstick performance of O’Connor in Make ‘Em Laugh, through to the water-drenched, brolly-twirling spectacle of Kelly’s titular show-stopper, the action blends the musical hall with the big screen with truly star-studded style.

The film’s ability to kindle (and rekindle) a sense of pure joy has now also been transported to London’s Palace Theatre by Jonathan Church, in a fantastic theatrical version with choreography from Andrew Wright and Simon Higlett. This recent stage show distils the essence of the musical marrying cinema and theatre retaining all the original joy of the tinsel town cinematic spectacle. Yet arguably Singin’ in the Rain’s greatest legacy is that it reminds us all of the magic of cinema, a world where it’s perfectly acceptable to burst into song and dance mid-sentence – and where happy endings are ever after.