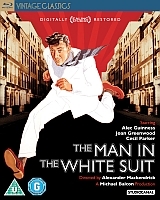 In 1951, Ealing Studios headed north with The Man in the White Suit, the story of a scientist, Sidney Stratton (played by Ealing stalwart Alec Guinness), who invents a super-resistant fibre that could revolutionise the textile industry and clothe the world for eternity. We meet our young hero as he slopes around the lab of Corland’s textile mill, an anonymous figure working on a seemingly madcap experiment at the vast expense of the mill owner, Michael Corland (Michael Gough). Corland is courting Daphne Birnley (a husky-voiced Joan Greenwood), daughter of neighbouring mill mogul Alan Birnley (Cecil Parker), whose money Corland is also after.

It’s Daphne who initially becomes aware of Sidney and she soon finds herself embroiled in his surreptitious experiments when he moves to her father’s mill. For the very first time, Daphne begins to take an active interest in the industry she once despised, yet has provided her with so much. At Birnley’s (the name surely a nod to Burnley, a town once dominated by the textile industry) Sidney meets Bertha (Vida Hope), the resident loud-mouth factory worker who pontificates on capitalism and workers’ rights. 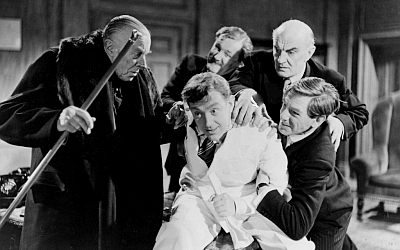 With her dungarees and hairnet, the feisty and compassionate Bertha recalls the women who just a few years before had kept Britain’s industrial engines running while its men were at war. Bertha and Daphne are Sidney’s only advocates, the men either dismissing him as a madman or, later in the film, as a threat to their empires and incomes.

It’s this twist in the tale that makes The Man in the White Suit so interesting. We meet the workers who fought for tea breaks while their owners travel in Rolls Royces; we glimpse the workers’ frugal lives; and when Sidney tells Bertha he won a scholarship to Cambridge, she responds that he did not have the requisite “old school tie”. Yet the workers and mill owners survive in a prickly symbiosis: when the two factions head off in pursuit of Sidney, they pile into the assembled Rollers looking like holidaymakers off on a jaunt to the seaside. Their physical proximity represents their common purpose and shows how men, whether rich or poor, share the same base instincts.

A comedy with a dark and complex heart, The Man in the White Suit deserves and demands the same level of recognition that so many of the Ealing Studio’s films already enjoy.