Severely in debt to his shadowy hoodlum benefactors, Chris manages to convince Joe to take on the job minus his customary advance on one condition – that Joe takes his virginal little sister Dottie (an impressively out-there Juno Temple) as a ‘retainer’ until the hit is made and the fee paid in full. Also banking on a cut is Chris’ beer-swilling, layabout father (Thomas Haden Church) and his despicable new wife Sharla (Gina Gershon), who are also more than happy to allow Joe the services of Dottie until the job is done. However, when Chris starts to get cold feet, proceedings take a significant turn for the worse. 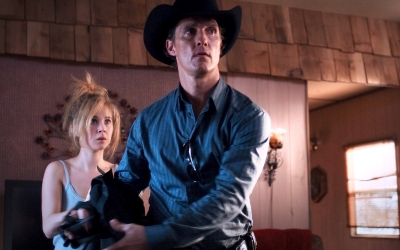 The second collaboration between Friedkin and Oklahoma-born playwright Tracy Letts in as many features (following up on 2006’s Michael Shannon-starring Bug), is as depraved and debauched a film as any that you’ll see this year. From parasitic, coke-pushing protagonist Chris to the leather-gloved, sociopathic Joe Cooper, each of Friedkin’s characters is more than happy to wallow in their own feculence for the audience’s enjoyment/discomfort. Despite acclamations of the film’s comedy credentials, Friedkin’s latest feels far more like an allegorical satire on greed and commodification than a straightforward side-tickler, despite several well-timed visual gags (with one involving a simple loose stitch).

It’s certainly easy to see why Killer Joe has ruffled a number of feathers amongst certain audiences. The on-screen treatment of women is (one assumes knowingly) nothing short of abhorrent, with one infamous scene in particular – involving a misused, fried chicken drumstick – rightly inducing one on-looking character to vomit uncontrollably. Yet Friedkin is no stranger to life’s detritus – be it human or otherwise – and appears to have thoroughly enjoyed unravelling the lives of his vile subjects with near-Shakespearean aplomb. Only Dottie comes out of the grimy, sweaty ordeal with anything resembling dignity, regardless of her association with the drawling Joe.

A dark, stomach-churning noir obsessed with ideas of ownership and possession (Friedkin is famously no stranger to the latter), Killer Joe may well appal as many as it appeases, but this is a film that demands to be taking seriously nevertheless. Despite claims to the contrary, Friedkin’s latest is no simple Kentucky-fried comedy.

Win a copy of William Friedkin’s Killer Joe on DVD with our brand new competition. Follow this link to enter.