Set in the early 20th century on the Norwegian island of Bastoy, a penal colony for young offenders, Marius Holst’s hugely absorbing King of Devil’s Island (2010) explores themes such as authority, responsibility and friendship. After aggressive, foolhardy inmate (Benjamin Helstad) arrives on the island, disgruntlement begins to brew amongst the child prisoner inhabitants. Meanwhile, another child (Trond Nilssen), who has curried favour with the strict but occasionally sympathetic governor (Stellan Skarsgård), is only a handful of weeks away from release; he dreams of a return to normality having spent almost half of his life on the island.

The two boys form a friendship, though the new arrival schemes an imminent escape. Together, they act as patriarch figures for the colony, instigating their own ascensions into manhood. As their attitudes mature, it begins to become clear that their places on the island are futile – they cannot be rehabilitated by isolation and cruelty, instead they need to return to the modern world, to normalise into society. 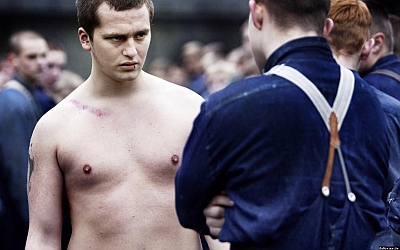 Towards the end of the film, during an escape attempt, the two friends reach a vast frozen lake. This natural obstacle, slowly cracking underfoot as they try to evade their pursuers, represents the difficulty they face returning to society – can they navigate the treacherous nature of normality, maligned by their youth offender pasts, without slipping to certain death? Despite handling some particularly tricky subject matters, King of Devil’s Island never resorts to sensationalism, choosing instead to remain measured and believable. It’s quiet yet effective, unstated yet powerful, a slow-burner that builds through a bubbling undercurrent into a conclusion that is surprisingly potent, if not full-blown emotional.

King of Devil’s Island continues the current rich tradition of fantastic cinema emanating from Norway, and Scandinavia in general. However, as a period piece not within the realms of pulp fiction – a la The Girl with the Dragon Tattoo (2009), Jackpot (2011), Headhunters (2011) et al. – Holst’s film offers something different from what we have grown to expect from that part of the world in recent years. This is cleverly crafted filmmaking, thoughtful and well researched, rather than upbeat and thrilling.