Bertrand Tavernier’s previously overlooked 1980 sci-fi satire Death Watch finally makes it way to DVD and Blu-ray this week following a limited theatrical rerelease earlier in the year. Starring Romy Schneider, Harvey Keitel and Harry Dean Stanton, Tavernier’s Scottish-set dystopian parable for the cultural decline of society’s respect for privacy is a provocative cocktail of intelligent science fiction and social parody. Set in a not too distant future, where almost all diseases have been cured and society no longer fears death in the same way it used to Tavernier’s futuristic society is a rather sterile and detached one.

An increasing reliance on reality TV for entertainment has resulted in a society that longs for tragedy – something TV execs have taken on board, creating a distinctive new show entitled ‘Death Watch’. The show’s premise consists of filming a rare, terminally ill protagonist whose suffering will be broadcast to millions of death-staved viewers. However the show is far more progressive than that, with cameraman Roddy (Keitel) having his recording equipment implanted into his head, with his viewpoint literally used to capture the suffering of first time victim Katherine (Schneider). Whilst Katherine initially, albeit reluctantly, accepts the role, she soon decides to escape to die alone. However, Roddy is always one step behind her, eventually winning her confidence and ultimately getting the perfect, intimate vantage point of her slow decline. 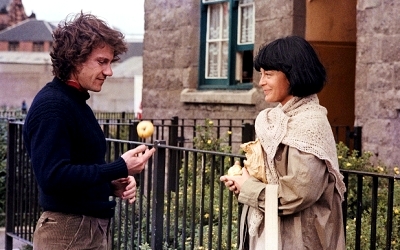 Science fiction has always acted to raise contemporary issues in an overblown manner, shinning a light on society and exposing the seeds of potential devastation. Death Watch is no different, foreshadows the rise and cultural saturation of reality TV. As topical today as it ever was (although a similar approach today would inevitably be received as trite and predictable) the way in which Tavernier explores the themes of personal privacy and our inherent, mildly morbid curiosity with the suffering of others makes for compelling viewing, expertly holding a mirror up to a society that enables television company’s delight that such cheap programming has become so universally popular.

The film’s Glaswegian setting does cause some mild issues for a contemporary audience, with the city’s distinctive sixties backdrop, whilst refreshingly lacking in spandex suits and hover cars, feeling more aligned with an episode of Hamish Macbeth than Tarkovsky’s Solaris (1972) – despite the film’s languid, introspective approach paralleling the latter’s ambience and direction. However, once Death Watch moves to the picturesque Scottish countryside the film comes alive, thanks primarily to the incredibly raw and intense performances of both Keitel and Schneider whose on screen chemistry is surprisingly explosive.

With Death Watch, Tavernier successfully pre-empted Western society’s increasing cultural obsession with media celebrity and our own voyeuristic fascination with manufactured real life, telling a near-future, sci-fi story against a barren, detached world disinfected by a lack of biological suffering with enormous effect. If you’ve never seen (or never heard of) this 1980 oddity, make sure you don’t think twice about seeking it out.