Currently gracing the silver screen with his turn as the morally dubious Martial in Jacques Audiard’s powerful melodrama Rust and Bone (2012), Bouli Lanners’ latest directorial outing arrives on the small screen via its DVD release. The Giants (Les Géants, 2011) is a meandering tale of one long summer in the adolescent life of three neglected boys. Surviving on the edges of society amongst the lush greenery of Belgium, this is akin to a childhood tale of summer days seen through the grittier lens of Lanners’ countrymen, the Dardenne brothers, as Seth (Martin Nissen) and younger brother Zak (Zacherie Chasseriaud) spend the long vacation in the house of their late grandfather.

The two brothers’ mother is busy elsewhere and although she makes contact via phone, every now and then, her sons are left to fend for themselves with their cash-levels dwindling. Through afternoons of joy-riding or languid days on sun dappled riverbanks, they meet and befriend another local waif, Danny (Paul Bartel) and the trio devise a plan to make some additional pocket change. 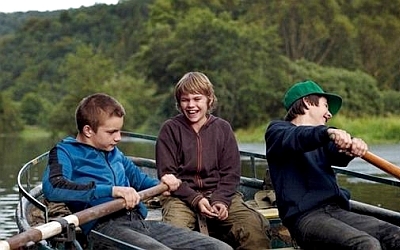 Their ill-advised money-making scheme sees their hot and bored summer come into contact with a local drug dealer for whom they vacate their grandfather’s house so that he might grow marijuana. Now homeless they must skip from place to place avoiding Danny’s psychotic and violent older brother, Angel (Karim Leklou). Lanners manages to keep this all feeling considerably lighter that it ought to be with the wit and charm of his three wonderful leads. Their chemistry as a marauding trio of teens is enough to sustain the audience’s engagement even when the story drops off considerably in the middle.

There are several great comic moments to be found throughout The Giants; not least the boys enjoying the run of someone’s holiday home. This results in three half-naked, newly bleached blondes scampering out through a window when a car pulls into the driveway. There are also moments where the unremitting grimness of those surrounding our protagonists breaks to allow some of that sunlight through – especially with Rosa (Marthe Keller), who takes them in for a brief spell.

By keeping the details of their circumstances vague, and by injecting very little narrative impetus into the proceedings, Lanners creates an enjoyable illusion of lost childhood summers infringed by the harsh realities of the outside world. The lack of drive does see The Giants flag somewhat but luckily the lead performances are enough to maintain interest and Jean-Paul de Zaetijd’s camera does wonders with the beautiful surrounding countryside.