Oscar-nominated for its engrossing original screenplay and featuring one of the year’s most impressive ensemble casts – including acting heavyweights Kevin Spacey, Paul Bettany, Jeremy Irons and Stanley Tucci – J.C. Chandor’s well-received directorial debut Margin Call (2011) makes its way onto DVD and Blu-ray this week with the global economic crisis still very much a hot topic for debate. An interweaving tale of poisonous assets and morally suspect business practices, Chandor’s tightly constructed fiscal drama is arguably the most definitive of all recent recession reflections made for the silver screen.

Set over the 24-hour period leading up to the infamous market crash of 2008, Margin Call opens to an office community rocked by a series of sweeping, on-the-spot redundancies. One of the more significant dismissals is that of senior risk analyst Eric Dale (Tucci), who, prior to being escorted from the building with his personal belongings in a cardboard box, hands over a seemingly innocuous USB stick containing projected models and data to junior staff member Peter Sullivan (Zachary Quinto), before issuing a somewhat perplexing warning to the young go-getter: “Be careful”. 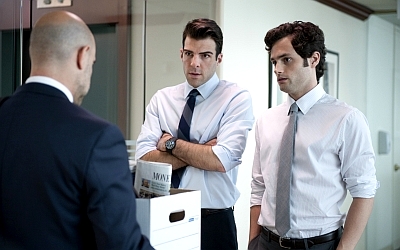 Saved from the chop and keen to impress his charismatic boss Sam (Spacey), Sullivan seizes the opportunity to continue working on Dale’s final project – only to discover that the contents of his former colleague’s innocent-looking USB could spell disaster for both the firm and Western economic stability as a whole. With the entire company seemingly hours away from certain meltdown, Machiavellian head honcho John Tuld (Irons) touches down in his private helicopter to steady the ship, only to discover that the one road to potential survival could also lead to a near-unparalleled Wall Street crash. The decision is there to be made – but will anyone be willing to make the cataclysmic call?

As with any thriller worth its salt, the success of Margin Call hinges upon the intensity of both its narrative and its performances – and fortunately, both are outstanding throughout. Unlike more traditional Oscar-baiting efforts, no one actor seeks to steal the limelight away from either Chandor’s intelligent screenplay or her/his fellow performers. Spacey, Bettany and Quinto are all excellent as representatives of the unfortunate floor tasked with breaking the bad news to the ominous Tuld (reputedly a character based on both Lehman Brother’s ex-CEO Dick Fuld and Merill Lynch’s ex-CEO John Thain), whilst Tucci’s ousted family man may even have you sympathising for the rich investment banker – if only just this once.

Depicting what is perhaps Western capitalism’s equivalent of the last day(s) of Rome (with the barbarians ready to strike at close of trading), with Margin Call, Chandor has not only managed to bring together some of the greatest character actors currently plying their trade, but has miraculously managed to sculpt a dramatic scenario so timely and naturalistic as to make his audience forget that they are watching established stars, rather than the characters they inhabit. Immensely watchable and unashamedly smart, fiscal irresponsibility has rarely been so unmissable.

Win a copy of J.C. Chandor’s superb Margin Call on DVD with our brand new competition. Follow this link to enter.