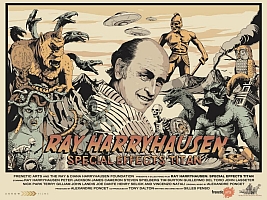 An auteur of special effects, Ray Harryhausen’s fantastical monsters are the stuff of movie legend. Now the subject of filmmaker Gilles Penso’s latest documentary, Ray Harryhausen: Special Effects Titan (2011) pays homage to the 92-year-old, who has influenced some of today’s greatest living mainstream directors, including Steven Spielberg, Guillermo del Toro and Peter Jackson (who all contribute here). Starting with 1949’s Mighty Joe Young (1949), we chart the visual artist’s work across the decades, culminating in 1981’s Clash of the Titans.

As a youngster, Harryhausen meticulously studied early SFX marvels such as King Kong (1933) and the work of Georges Méliès, evolving their processes whilst developing his own techniques. This trajectory is accompanied by a glut of heartfelt talking head interviews from contemporary sci-fi and fantasy directors (with the notable absence of George Lucas), who point to various scenes from their own movies that have been influenced directly by Harryhausen; the Tyrannosaurus Rex in Spielberg’s Jurassic Park (1993); the mechanical arms of Dr. Octopus in Sam Raimi’s Spider-Man 2 (2004); the scurvy skeletons of Pirates of the Caribbean: The Curse of the Black Pearl (2003). 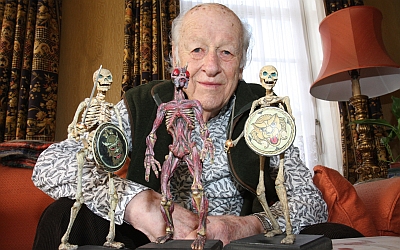 For many, Harryhausen’s stop-motion creations – which he affectionately dubs as his ‘creatures’ – immediately kindle memories of childhood wonder. Classics such as The 7th Voyage of Sinbad (1958), Mysterious Island (1961) and the iconic Jason and the Argonauts (1963) all bear his distinctive mark. Once seen, it is almost impossible to forget the terrifyingly serpentine Medusa, the duelling skeleton warriors and droning giant bees that now have earned iconic status within the fantasy film genre.

Penso’s documentary crucially allows us to see these creatures out of context, often no bigger than a foot tall. This provides a chance to appreciate the level of detail and care the artist put into his creations, the shots of his London workshop – where the beloved characters are now stored – showing off the tremendously prolific out-pouring of clay beings of all shapes and sizes that Harryhausen created (each of which could be manipulated at a painstaking pace to create the desired effect).

Riding very much on the nostalgic affection audiences have for the majestic Harryhausen’s work, Penso’s Special Effects Titan is a standard issue documentary in form, yet something very special in terms of content. It may not be lavishly produced (unlike many of the films RH worked upon), but above all it functions well as a thunderous round of applause for the career of a much-loved movie magician, who filled our childhoods with so much wonderment and spectacle.