Cast out onto the festival scrapheap following its divisive 2010 Cannes debut, Cristi Puiu’s three-hour Romanian drama Aurora (2010) makes its way to UK cinemas this week thanks New Wave Films. Its mammoth runtime will likely put off many, but those prepared for a slow-paced study on the drama of the everyday – dappled with sporadic flourishes of violence – should come away satisfied by this clinical dissection of humankind’s murderous inclinations. Though never quite reaching the same existentialist zenith of some of his highly regarded contemporaries, Puiu has nevertheless constructed a drama of significant heft and impact.

Puiu himself stars as poker-faced protagonist Viorel, a recently divorced father of two living out a lonely existence in the Romanian capital of Bucharest. With no home life to speak of, Viorel spends his days working as an engineer at a local factory (his only interaction with colleagues being minor transactions – one involving the purchase of two pins for a hunting rifle) and his nights wandering the desolate train yards of the city. However, we gradually discover that the jilted husband’s somewhat bizarre actions are not completely without motivation. 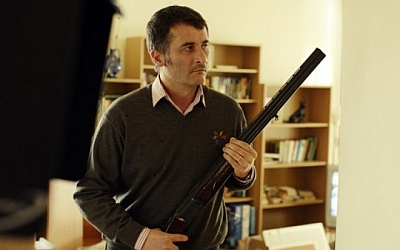 One of the main stumbling blocks audiences may face when feeling their way into Aurora is Puiu himself as the film’s cold, quiet subject. Almost completely devoid of emotion for seemingly the entire course, Viorel is an enigma who’s hard to engage with, let alone understand. His actions are shrouded in mystery for great stretches, with his homicidal machinations only truly addressed at the film’s delayed denouement. Up until that point, we are left in the company of an often awkward introvert, methodical to the point of distraction, only occasionally revealing what lies beneath his calm, collected exterior through the most subtle of gestures.

What Puiu does provide, however, is a naturalistic portrait of modern Romania, a country blighted by the same ills of many of its Western counterparts. The fragmentation of community is an underlying theme, Viorel as much a stranger to his own neighbours as he is to himself. An awkward relationship with a young mother upstairs bears little or no fruit, their coupling as cold as it is mechanical – a criticism that could quite easily be aimed at Aurora itself. This continuing sense of disinterest is revisited once again in the film’s procedural-style climax, our protagonist’s cataclysmic acts rendered almost ineffectual by the two disinterested handling officers.

Aurora functions as a single piece in a larger puzzle, with Puiu’s third feature reputedly the second in a projected series of six films exploring the state of contemporary Romania (his award-winning 2005 effort The Death of Mr. Lazarescu presumably the first). As a stand alone effort however, it would be fair to say that Aurora only rewards those willing to invest the requisite amount of time and patience in its intentionally languid, deceptively high maintenance narrative arc.