The Rocky Horror Picture Show’s reputation certainly precedes it. This October, a new cinematic rerelease of Richard O’Brien’s 1975 cult classic will see throngs of fans fastening their suspender belts and donning shiny, gold speedos as they pay tribute to one of the most iconic musicals of all time. A homage to the B-movie of old, Rocky Horror is filled with references and nods to all things horror and sci-fi, with Tim Curry inexplicably oozing masculinity – despite wearing stockings and a corset – in a career-defining performance as the eccentric scientist Dr. Frank-N-Furter: a sweet transvestite from the planet of Transylvania.

Frank-N-Furter is in midst of throwing a very alternative party when his celebrations are interrupted by the newly engaged Brad (Barry Bostwick) and Janet (Susan Sarandon). While seeking assistance for their broken down car the couple stumble upon his Gothic abode and inadvertently becomes privy to the scientist’s secrets, as he reveals his magnificent creation to his guests. 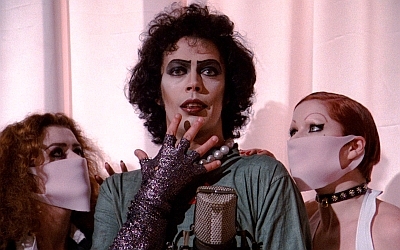 Brad and Janet soon find their innocence is lost as they become willing prisoners in Frank’s house and he introduces them to a world of uncertain pleasures and sins of the flesh. O’Brien himself guides us through the film, starring as the screeching handyman Riff Raff, alongside a cleverly stock cast of characters including a Criminologist (Charles Gray), a rival scientist (Jonathan Adams) and a groupie (‘Little’ Nell Campbell), as well as an entertaining cameo from Meat Loaf as an ex-delivery boy.

The film will take you on a hedonistic romp through O’Brien’s unconventional world. An ‘erotic nightmare beyond any measure’, Rocky Horror is full of infectious song and dance numbers, intentionally laughable dialogue and farcical set pieces, also encompassing alluring visuals that range from the absurd to borderline genius. Prepare to be left feeling dazed, confused and perhaps a little dirty, as the closing credits role and you’re left unashamedly asking for more. Not for the faint-hearted, O’Brien’s cult hit certainly won’t be everyone’s cup of tea, but for lifelong fans or those who adore kitsch, this is a viewing experience not to be missed.

From the outset this film is tongue-in-cheek, but with creepy undertones and a sci-fi inspired storyline it is ideal Halloween fodder for anyone wanting to avoid a generic horror movie this season. Whilst Rocky Horror is to be taken with a very large pinch of salt, it is a film with real heart, and the less conservative viewer will appreciate its resounding, liberal message: ‘Don’t dream it; be it’. For willing subjects, The Rocky Horror Picture Show won’t disappoint. But be warned: once you get your first taste of the time-warp you mind find it hard to look back.