Today sees the opening night celebrations for the 6th incarnation of the annual Russian Film Festival. Held across numerous highly regarded London cinemas (including the Apollo Cinema at Piccadilly and The Aubin in Shoreditch), this year sees the festival widen its scope beyond the capital, for the first time, holding screenings in both Cambridge and Edinburgh. Providing UK audiences with the opportunity to sample some of the most illustrious Russian films of the year, the event – run by London’s Academia Rossica – is fast becoming one of the most important national film festivals held in the UK.

In previous years, the festival has screened some of the best films to emerge from Russia including Pavel Lungin’s languid study of religious faith and guilt, The Island (2006), Nikita Mikhalkov’s Academy Award-nominated 12 (2007), Alexei Popogrebski’s beautifully fashioned Arctic thriller How I Ended This Summer (2010) and Andrei Zvyagintsev’s Elena (2011), which is currently mesmerising critics and audiences alike after its UK theatrical release last week. 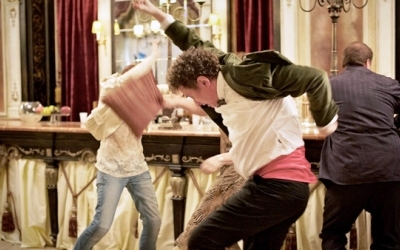 An eclectic mix of pensive dramas and insightful documentaries, the festival boasts a wealth of films which reflect the diversity of contemporary Russia – a country in a constant state of cultural transformation. Highlights of this year’s RFF programme include Vasily Sigarev’s challenging and provocative Living (Zhit, 2010), Sergei Loban’s sprawling, 207-minute epic tale of interwoven narratives, musical vignettes and surrealist comedy, Chapiteau Show (2011), and Pavel Lungin’s most ambitious work to date, The Conductor (2012). All films will be screened in both Russian with English subtitles, with most accompanied by Q&A sessions by the film’s directors and/or cast.

In addition to the festival’s main programme of UK premières will be a retrospective of Andrei Konchalovsky’s work. Regarded as one of Russia’s leading directors, Konchalovsky worked with Tarkovsky on Ivan’s Childhood (1962) and Andrei Rublev before moving on to direct his debut, The First Teacher, in 1961. His career has been mixed (with the festival understandably choosing not to screen 1989’s Whoopi Goldberg and James Belushi-starring Homer and Eddie), but the Russian Film Festival will give audiences the chance to witness the highlights of a career which have so-far spanned six decades.

CineVue will be covering this year’s RFF, so be sure to check back for reviews of this year’s event. To buy tickets or for further info, please visit the festivals official website here: academia-rossica.org.