Once upon a time, long, long ago, everything – including film – seemed more innocent. A classic example of this are the live action fairytales filmed by the Pathé Frères company at the dawn of 20th century cinema, now rereleased by the BFI. Their plots – if indeed two dancers cavorting in-front of flat scenery as in Valse excentrique (Eccentric Waltz, 1903) constitutes a plot – may appear naive when watched now. However this innocence belies the bizarre beauty of what are often no more than stage productions put on film, where the heroic princes, bewitching maidens and wicked witches which peopled these weird tales come alive in a rainbow of primary colours.

Often involving dancers appearing as beautiful insects, as in Métamorphose du papillon (Metamorphosis of a Butterfly, 1905), or stories which favoured not so bright young men falling foul of an array of evil creatures in hellish settings as in L’Antre de la sorcière (The Bewitched Shepherd, 1906), these celluloid gems mesmerised their audiences through trick photography and elaborate settings. Directed by such pioneers of European cinema as Ferdinand Zecca, the footage was painstakingly hand or stencil coloured by hundreds of women at Pathé Frères’ state of the art colouring factory. 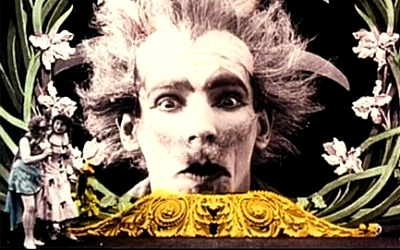 Lasting between one and sixteen minutes films like Cendrillon ou La pantoufle merveilleuse (Cinderella, 1907) gave short, sharp shocks to the senses, like vibrant firework displays ending in a blaze of neon glory. Made before advent of the modern rental system, these films were produced in vast quantities and then bought by exhibitors who would play them many times in order to make any kind of profit.

Many of the transfers were made pre-digital in standard definition, and frequently straight from nitrate copies in order to retain the original stencil colouring. Archivists have purposefully avoided digital clean-up processes to retain the historical importance of the films, and the resulting wear and tear of many prints, including those used by the BFI, is obvious, though this if anything only adds to their appeal.

Set to specially commissioned music by contemporary recording artists such as the Swedish sound artist BJ Nilsen, the eclectic use of everything from underwater microphones to the spoken word adds quirkiness to the freaky fairytales unfolding before your eyes. Typically, the BFI have enhanced the release with a host of extras including a lavishly illustrated booklet that brings depth to the disc’s enjoyment.