Step Up 4: Miami Heat (Step Up Revolution, 2012) is the fourth film in the successful Step Up film franchise. It is produced by the third film’s director, Jon Chu and directed by Scott Spreer. This time, the familiar romance vs. social calibre storyline is transported to Miami, with a beautiful and undeniably talented new cast, some smooth new moves and an updated score. Beneath the glare of the Miami sunshine, Emily (Kathryn McCormick) has aspirations to become a professional dancer but when she meets Sean (Ryan Guzman), the leader of YouTube sensation The MOB her life takes a complicated turn.

Caught between a love of dance, a blossoming relationship with Shaun and the disapproval of her Father, Emily is forced to make some difficult choices. Her evil Father (Peter Gallagher) adds to complications when he threatens Sean’s neighbourhood with development plans that will not only destroy the area but trample the dreams of the dance crew. Emily persuades her inspiring new group of friends to stand up for their beliefs and turn their performance into protest art. But will the bulldozers prevail? 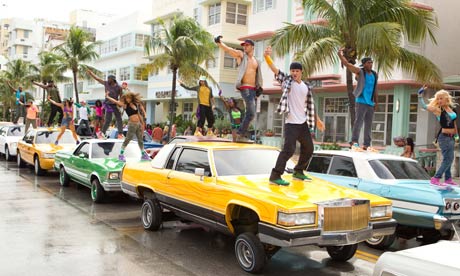 Following the tradition of its predecessors, Step Up 4 sticks to the formulaic scripture that has so far made a success of the street-dance genre. However, whereas the earlier films focused on dusky basements and rain drenched alleyways, this film does as it says on the tin and takes place under the scorching Miami sunshine, which is a welcome and refreshing alteration.

The camera friendly cast is young, beautiful and gifted when it comes to busting a move. Aside from Gallagher’s admirable turn as the pantomime villain father/boss, the acting is questionable, but in films of this genre, histrionics and the quality of the screenplay come secondary to skill and choreography. The routines are at times, breathtaking and the actors are definitely given the ability to demonstrate their strengths. However, there are moments of sheer frustration as the sync of the flash mob routines get lost in a mass of frantic edits and slow-mo shots, where Director Spreer’s enthusiasm occasionally overshadows the efforts of the film’s choreographer (Travis Wall).

For viewers who have never seen a Step Up film, entry number four is perhaps not exactly the best place to start. The script has the predictable format of a made for TV Disney movie and the acting is on par with Paul Verhoeven‘s Showgirls (1995). Overall, the film plays like an MTV Miami special and it certainly brings nothing new to the floor, apart from sunshine. Newcomers – steer clear but for those familiar with the series Step Up 4: Miami Heat, will no doubt, tick every body-popping beat-box.